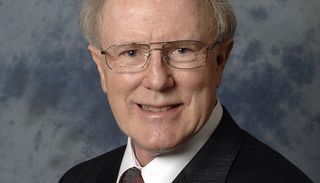 Even the most jaded industry pro will remember (if they’re old enough) the InfoComm show in Philadelphia in 1996. As it happens, that was the first InfoComm that I attended, and it kind of spoiled me for drama—at every show after that, I always expected to see an unveiling of a technology platform as revolutionary as the launch of Texas Instruments’ DLP, as was debuted that year in the form of a new video projector with a fixed resolution and a groundbreaking new digital imaging system.

Twenty years after that momentous debut, it’s fitting that we now induct the father of DLP, Larry Hornbeck of Texas Instruments, into the SCN Hall of Fame. They say that success has a thousand fathers, while failure is an orphan, and the story of DLP has many fathers (and very few failures), yet Hornbeck can indeed claim bragging rights on high order.

“As the national sales manager of Hughes Light Valve Products at the time, I also remember going to InfoComm in Philadelphia in 1996, totally full of ourselves and convinced that we would own the projection market,” said industry consultant Alan Brawn. “We had not yet heard of another upstart technology called a ‘digital micro mirror device,’ or DMD for short, and that back in 1987, a scientist at Texas Instruments, Dr. Larry Hornbeck, developed an optical semiconductor capable of steering photons with unparalleled accuracy. His ‘moving mirror chips’ were an interesting footnote to what we thought was an otherwise bright future for our new venture. Little did we know.”

Development of the DLP chip actually began in TI’s Central Research Laboratories in 1977, when Hornbeck first created “deformable mirrors” to manipulate light in an analog fashion. But the analog technology consistently fell short of expectations. It was not until 1987 that he invented the DMD, the breakthrough technology that would become known as the DLP chip. During the mid-1990s, TI established the DLP Cinema team, chartered to develop a digital projector that could match the quality of 35mm motion picture film.

As a result, the last two years have seen some impressive hardware handed to Hornbeck personally, culminating on February 9, 2015, when he was presented an Academy Award “for his contribution to revolutionizing how motion pictures are created, distributed, and viewed.”

Hornbeck holds 38 U.S. patents, and his numerous other awards and honors include induction into the National Inventors Hall of Fame, the SMPTE 2002 David Sarnoff Medal Award, and a 1998 Emmy Engineering Award. He is also a member of the National Academy of Engineering and a Fellow of the SMPTE, IEEE, and SPIE.