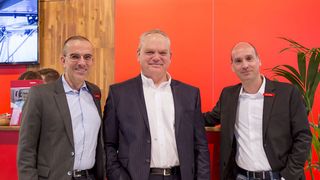 These new partnerships will create a research and development (R&D) hub in Zurich, increase Riedel's global engineering team to more than 100 engineers, and expand its R&D capabilities for IP and standards such as AES67, which will further boost interoperability in the broadcast world. The latter acquisition will allow Riedel to enter new markets and get closer to musicians, many of whom already rely on Riedel technology in the background.

"At Riedel, IP standards are vital not only for our intercom portfolio but also for all of the other Riedel product lines," said Thomas Riedel, founder and CEO of Riedel Communications. "By collaborating with Archwave, we are taking another important step toward providing complete networking solutions that allow broadcasters to work the way they want to work. With our new engineering team in Switzerland, we now have all the tools we need to create the plug-and-play workflows that our clients need for their transition to IP."

"It is not often that such a strong and obviously strategic fit presents itself, but that is what I found with Riedel,” said Arie van den Broek, CEO of Archwave Technologies. “Riedel's strength, operational excellence, and commitment to open technology were the factors that drove the development of this new relationship. We also appreciate that the deal offers new channels to markets within the existing Riedel organization. The team and I are extremely happy and excited to move forward as part of the Riedel family.”