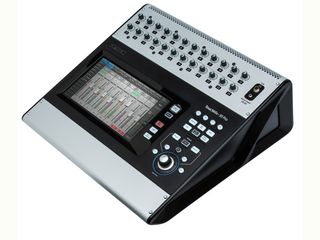 The What: QSC introduced the TouchMix-30 Pro, 32-channel digital mixer, with immediate availability in select markets.

The What Else: With 32 mixing channels (24 mic/line, six line, stereo USB) and 16 outputs, the TouchMix-30 Pro offers signal management flexibility for a wide range of applications. Beyond offering a higher channel count than its predecessors, a host of additional, new “Pro” features sets TouchMix-30 Pro apart from its smaller TouchMix Series siblings.

“The TouchMix-30 Pro builds on the stellar reputation of its predecessors, offering more of the results-oriented capabilities that set TouchMix Series apart from other mixer alternatives, adding new, advanced capabilities typically found in products at a far higher price,” said QSC Professional director of marketing, Ray van Straten. “Customer response from our extensive global field testing and as measured by pre-release orders has been incredible. Clearly, this is the right product at the right time for the market and we’re quite confident that the TouchMix-30 Pro will exceed customer expectations in every way.”

The Bottom Line: Well suited for production professionals, musicians, and bands as well as live performance venues, TouchMix-30 Pro is a compact digital mixer with features and functionality for demanding professionals, with an intuitive workflow for users at every level of experience. The TouchMix-30 Pro is available immediately in select markets worldwide. List price is $2,359.99 with a U.S. estimated street price of $1,899.99.