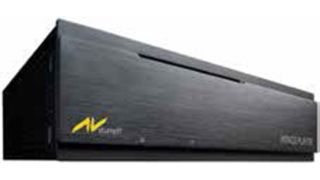 They won’t catch your eye, or beckon you from afar for a closer look. They won’t draw a crowd at InfoComm. But without them, the world would be a much less exciting visual place. While big, beautiful, high-resolution displays are grabbing all the attention, these little guys are sitting in the background, making it all possible. Handling 4K video at 60Hz, playing a wide variety of file types, and running for strenuous durations without fail, the following is a selection of some of the latest digital signage and media players that are making today’s video revolution possible.

The What: Wings Player from AV Stumpfl is a compact but powerful high-end digital signage hardware player.

The What Else: The Wings Player has a compact form factor of 355 by 90 by 220mm, and supports various high-quality video codecs with resolutions of up to UHD/4K. It features automatic camera-based calibration and soft-edge blending for flat surfaces, and can be upgraded for use in 3D projection mapping setups. It features AV Stumpfl’s EDID management software as part of the Wings AV OS, allowing users to load any pre-defined output signal EDID. Any number of Wings Players can be united in clusters with the video outputs synchronized.

The Bottom Line: Wings Player is designed to close the gap between simple video players and full-blown media servers, and is engineered for use in various fixed installations such as themed attractions, digital signage, museums, and corporate information systems.

The What: The Extron Electronics SMP 111 is a high-performance recording and streaming processor for capturing and distributing AV sources and presentations as live streaming and recorded media.

The What Else: The SMP 111 can record and stream simultaneously, with independent resolutions and bit rates using a range of transport protocols and session management options. Recording with the SMP 111 provides capture of live HDMI signals to an internal flash drive and external USB drives. Optional RCP 101 Series remote control panels are available to extend both front-panel control as well as USB connectivity for thumb drive recording media.

The What: HMP350 is a player designed for digital signage deployments that require advanced features and third-party integration.

The What Else: HMP350 features a DaVinci DM8148 (ARM Cortex-A8 1GHz) processor and internal 16GB solid state drive, with 2x USB2.0 connectivity for external hard disks and flash drives. Engineered in Switzerland and assembled in Germany, it has a low power consumption, full programmability, and is designed for 24/7 uptime, even in harsh conditions. HMP350 players natively run SpinetiX’s Elementi software, which facilitates not only the content creation, but also the control of an unlimited number of players.

The Bottom Line: HMP350 has advanced features such as any-size and any-resolution video walls including LED, live video streaming, and interactivity. It can be integrated virtually with nearly any third-party technologies for applications such as sensors, gauges, and security cameras.

The What: The Christie Spyder X80 is a media player solution for today’s higher image resolutions and is capable of handling 4K at a 60Hz refresh rate on a single channel.

The What Else: The Spyder X80 offers massive display canvas support: a modular configuration supporting up to 24 inputs and 16 outputs, with all connections capable of displaying 4K at 60/50Hz, delivering 4K support for narrow pixel-pitch LED, tiled video walls, plus complex, multi-display projection environments. Designed to be scalable and flexible for 24/7 operation, it features Christie Spyder Studio client software GUI for show control, from simple presets to complex, frame-accurate timelines.

The Bottom Line: The Christie Spyder X80 multi-screen windowing processor offers many capabilities for rental, staging, and large-scale experiences that help make display walls easy to set up and manage, while incorporating the latest standards and connectors, including HDMI 2.0, DisplayPort 1.2, and 12G HDSDI.

The What Else: Carousel Enterprise Server can be deployed in fully virtualized environments driving thousands of players, installed on customers’ own server hardware, or paired with Tightrope’s 1RU Carousel 440 digital signage server appliance to drive up to 300 channels of content. Carousel supports a flexible array of digital signage players, including Tightrope’s own Carousel 270 compact Windows-based player.

The What Else: The KDS-MP4 features HDMI video and audio, and supports a wide range of codecs. It has an internal 8GB storage space, NTP client for time synchronization, and integrated SMIL control. It comes with Media Manager software for versatile management of digital signage content via a PC, and multi-language support with readymade templates for screen layouts, logos, tickers, and widgets. Designed for efficient heat dissipation with perforated side panels, the KDS-MP4 comes with a VESA standard mounting bracket for mounting on wall, inside a cabinet, or to the VESA standard screw holes on the rear panel of a display.

The Bottom Line: The KDS-MP4 unit receives content from the Media Manager software installed on the PC—either via LAN or from an external USB memory stick—loads it into its internal memory, and then displays it with image quality of up to 4K60 4:2:0 via the HDMI output.

The What: Analog Way’s VIO 4K is an all-in-one video scaler, scan converter, switcher, coder, and transcoder. It can convert any input signal format to any output format up to 4K/UHD and features the latest generation of connectivity, including Dual-Link DVI, DisplayPort, HDMI, optical, universal analog, and 6G-SDI.

The What Else: VIO 4K features a high-quality processing engine for crisp and natural images whatever the source and the scaling level are, while maintaining processing latency as low as one frame. VIO 4K also includes three slots for optional I/O interfaces to provide optimum versatility and double or triple the output capability. An extensive set of audio and video expansion modules is available, the most powerful of which can convert HDMI 2.0 or DP 1.2 to either Quad-Link 3G-SDI or 12G-SDI, and vice versa, while supporting formats up to 4K at 60Hz, 4:4:4.

The Bottom Line: The VIO 4K is engineered to be road-hardened to survive demanding live event environments and operate with maximum uptime and low maintenance.

The What: The XMP-7300 is IAdea’s flagship “Armoroid 4K” digital signage media player, and is designed for professional, outdoor applications.

The What Else: IAdea XMP-7300 features AnyTiles, a super-fine, super-large video wall solution. Utilizing one CPU per screen, AnyTiles can create live animation on video walls of virtually unlimited size. IAdea XMP-7300 is available with the following technologies built-in upon customization request: Armoroid, which is engineered for the modern retail environments and powered by the IAdea Retail Suite; and AniBeacon, a screen-to-mobile interactivity solution. Enabling digital signage to send out dynamic, content-specific beacon codes, AniBeacon allows digital signage content to trigger response from existing Apple iBeacon and Google Eddystone apps.

The Bottom Line: The XMP-7300 is designed for reliability, with extended operating temperature range and higher shock and vibration tolerance; flexibility, with playback control through included software, HTML5, SMIL playlists, Android, and other third-party content management systems; and performance, with 4K60 HEVC/H.265 from an HTML5 playback engine and quad-core CPU.

The What: Seneca Data has released a recently overhauled, next-generation version of its VWC-PLUS video wall controller.

The What Else: Seneca’s Parallel Sync technology accommodates four full-length, double-width GPUs (up to Nvidia Quadro P6000 24GB) all locked to a master sync device. Featuring the latest in Intel Core i9 Extreme processors in combination with a custom-developed BIOS and system performance tunings, the VWC-PLUS yields maximum throughput from the PCIe bus as well as uninterrupted processor speed and scheduling. From 4K outputs to 3D content, to VR and AR applications, the VWCPLUS is capable of handling the demands of today’s AV professionals.

The Bottom Line: Leveraging its in-house design and engineering team, Seneca has incorporated its proprietary Parallel Sync technology to yield an increase in display outputs in a 4U chassis. Seneca VWCPLUS with Parallel Sync lowers cost per output without sacrificing performance, further defining the VWC-PLUS as a versatile, powerful video wall controller.