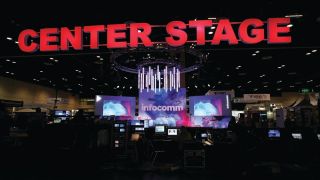 The second day of Center Stage got off to a brainy start and then kept right on going through to one of the program’s peak sessions. The opening session by Ira Weinstein dug deep into right-sizing AV for the modern workplace, and the day’s closer was a spectacle of future-centered MIT Media Lab research by Kipp Bradford.

Bradford not only brought thrills and chills with his vintage MIT VR experiment footage, but he projected a multi-person VR immersive crowd scene in his yurt project. VR as a tool has “changed the paradigm of how we program computers, bringing the programming environment from a two-dimensional text-entry interface to a rich sensory interaction,” where programming is done through the manipulation of VR versions of physical objects.

Mid-day, the crew from Britelite Immersive persuaded the audience to look beyond the bright, shiny box and focus on storytelling. Basically, if a client asks for cutting-edge technology, said Jeremy Rosemblum, Director of Operations for Britelite, “then you’re already starting to solve your own problem. We try to get back to what is the need that you were trying to solve at the start.”

Once again, the Center Stage program ran the applications gamut, exploring the many ways in which AV technology is influencing fields beyond our market and vice versa. Now is the time to get excited about all the use-case speculation coming to life—in fact, we can finally dismiss an old dismissive notion because “We are saving lives here,” according to Dr. Thomas Osborne of vRad.

Really, our technology is showing vital signs that connect all these next-level technologists to our world, as they need our expertise more than ever.