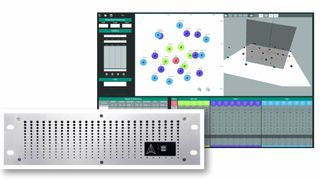 Astro Spatial Audio is the holder of exclusive worldwide rights for SpatialSound Wave Software for the live entertainment industry developed by the Fraunhofer Institute for Digital Media Technology, IDMT. This unique audio system facilitates directional production of sounds and acoustic environments without the audience being restricted to preferred seats. The system offers an intuitive user interface, an extended sweet spot, and several features for real-time movement and positioning of sound objects. Equally noteworthy, productions can be scaled up or down to different rooms or loudspeaker configurations—free of audible artifacts, such as phasing or comb filtering.

At a recent showcase, architect and noted acoustician John Storyk, founding partner of the Walters-Storyk Design Group auditioned the Astro Spatial Audio 3D system. “My initial impression of the system and its technology was that it is very impressive. What I particularly liked was that it is a system offering a family of tools and technologies that can work for live and curated performances, as well as serve as an architectural-acoustic adjustable immersive system—allowing for environments to be electronically altered. This is a powerful tool for designers such as ourselves at WSDG. I particularly enjoyed that it is speaker agnostic."

Rodger Reeder, president of HoughtonLloyd, offered the following comments about the new Masque Sound agreement, “We are extremely excited about Masque Sound becoming our flagship dealer for Astro Spatial Audio here in the US. Now that Masque has purchased an ASA system for demonstrations at their New Jersey facility, this incredible new audio technology can be shared with some of the top audio professionals in the country. We couldn’t be happier about our new relationship with Masque Sound.”

Geoff Shearing, president of Masque Sound, echoes Reeder’s enthusiasm, “We have already seen an incredible response to this product by the sound designers in our community. As a leader in providing innovative solutions to our field, we felt very strongly that we needed to get behind this groundbreaking device. I’m very much looking forward to seeing what new directions this product will take us.”

The Astro Spatial Audio–Masque Sound authorized dealership agreement was finalized in August 2016. Interested parties may contact Masque Sound by phone at (201) 939-8666 or via the company website: www.masquesound.com. Interest parties may also contact the office of HoughtonLloyd at (310) 651-8053 or via the company’s website at www.houghton-lloyd.com. The Astro Spatial Audio 3D audio system will be demonstrated during the upcoming AES Show in Los Angeles, CA (September 29th thru October 1st) in Room 511C.