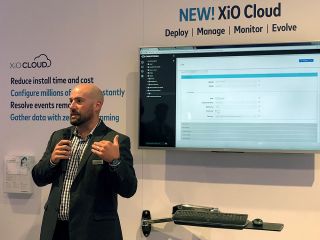 In our previous blog we discussed DM NVX Director, a single management appliance that as part of the Crestron DigitalMedia platform and allows users to configure, monitor, and manage all DM NVXs on the network. The next critical piece of this ecosystem is XiO Cloud.

Crestron XiO Cloud was announced at last year’s InfoComm. Perhaps integrators weren’t ready to grasp its ultimate impact, or maybe it didn’t make a big splash because it wasn’t yet shipping. Whatever the reason, XiO Cloud flew below the radar. That is, until this April.

Sometimes you have to be in the midst of energy to feel the impact of a storm brewing. In April, I was invited to attend Crestron Masters, where more than 900 Crestron programmers and designers gathered for 41 unique in-depth training courses of new products and releases.

At Crestron Masters in April, the announcement that XiO Cloud was ready to rumble had many attendees looking for shelter. Will programming still exist? “Sure,” says Richard Sasson, Global Director of Technical Services. “But the bread and butter is going to be mass deployments, configurations, reporting, creating a service that customers want and real value that customers need—a real return on investment. This is about new tools and techniques for new types of spaces. That doesn’t mean the old is going away, it just means we are growing as an industry.”

XiO Cloud is a paradigm shift in the industry to allow AV deployment, management, and monitoring in the cloud. Fortunately, the pump has been primed for this transition as most enterprises have already been migrating to the cloud.

Previously, devices had to be programmed to communicate to Crestron servers via Fusion. “Often times that was not done consistently and was riddled with opportunity for error because you could only send information one way,” says Nic Milani, Director, Commercial Product Marketing at Crestron. At the end of the day it was heavy lifting to implement. “We’ve taken 15 years of learning and spent the last five years, and tens of millions of dollars developing XiO Cloud so that our devices will inherently report all information up to the Cloud.”

“XiO Cloud provides the ultimate level of management of our devices with no programing, and no touch,” says Milani. Once plugged into the network, devices inherently know how to talk to each other. “This has a huge impact on the ability to deploy solutions. Before you would have to go room-by-room and plug in the devices, configure them, test them and then you could get the room to work,” explains Milani. “Now you can load all of those configurations and settings via spreadsheet and the webpage, and when the device plugs into the network it pulls down its firmware, its configuration, and the program—and now it just works.”

If it is detected that a device doesn’t have the correct firmware, the device is able to pull down the correct version or send an alert requesting permission to update. “When you want to push a program to every DM NVX that you've installed—in a hundred or tens of thousands of rooms—XiO Cloud can push all of those configurations and settings down to each device,” says Milani. “We think you can reduce deployment time by up to 90 percent.”

It's not to say that the old way was wrong; it was very effective. The problem was it didn't scale well. Enterprise customers demand scale, especially as IT practices drive workplace technology deployment and usage behaviors.

Crestron has a built-in path to the Cloud for its customers. “Anybody that is on a 3-Series processor or newer can update the firmware and connect.” There is a fee for XiO Cloud. Companies that have migrated to the Cloud for other systems fully expect cloud services are not free.

Today, the ability to be agile is critical. “We're at the point where organizations need the flexibility to change every six, nine, or twelve months,” says Milani. XiO Cloud enables the deployment of virtually thousands of devices anywhere in the world and will report back and on whether it was successful.

Every device is constantly being monitored. “Every setting and variable that's being measured in every one of our boxes can be flagged if something goes wrong.

Microsoft’s Power BI analytics visualization tool works with XiO Cloud as data is collected from all the devices, from error reports to room usage. “Now we can see how people are using the technology, what technologies they're using, and where they're using it,” says Milani. XiO Cloud provides tools to dynamically change the system for the most effective use of equipment and spaces, which is critical given today’s high real estate costs.

“We are talking about the ability to deploy tens of thousands of devices spread across many countries,” says Milani. “With continually changing data laws and security updates, you do not want to go out and build that on your own.” Crestron’s infrastructure is built on the same infrastructure as Microsoft’s.

We've got space in four Microsoft Azure data centers around the world,” says Milani. No matter where a company is located, it can be supported.

“We provide a one-skew solution that can handle all these different technologies, and you've got this beautiful ecosystem and the ability to have an adaptive system that really works in all kinds of different scenarios,” concludes Milani.

Thank you for following these six installments of the InfoComm Networked AV Series, where we explored this and much more:

Networked AV is More Than a Disruptor

Not All Digital AV Needs to be On the Network

When AV Actually Meets IT Needs

To catch up from the beginning, visit the Resource Center.