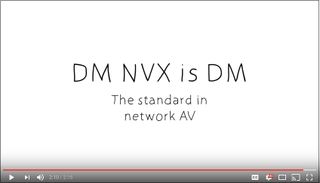 Since we’ve been reporting on AV over IP, there’s been an asterisk. Or more like a hammer from IT directors declaring “not on my network!” Enterprise networks are carefully guarded, as they should be.

The AV industry has spent a lot of time discussing latency and compatibly issues of networked AV, then preaching how AV folks need to become IT experts. Yet you could say we’ve only pontificated about AV/IT convergence.

Until now, AV over IP products were designed as digital iterations of analog products with matrix switchers and other devices requiring customized programming to communicate on a network. Because many AV over IP products are complex and bring with them too many variables such as bandwidth-choking video—as well as potential security holes—the easier and safer route has been to create an ‘AV network.’

Is it really networked AV when it can’t live on the enterprise network? Most would say no. Many IT directors would say they don’t care, as long as it wasn’t on their network.

What if AV solutions were developed so they needed to live on a standard 1-Gig Ethernet enterprise network, and that they needed to connect as easily as printers, and that security concerns were addressed?

Think of a world where AV integration expertise is directed to the areas that matter most. IT departments don’t need to run duplicate infrastructure of cable and switches. Extra routers and extenders aren’t needed, capital expenses are potentially cut in half, and everything becomes simpler. Sounds like truly converged networked AV.

“IT folks who own the infrastructure want to minimize the number of things they need to manage and monitor,” says Daniel Jackson, Director of Enterprise Technology at Crestron. “To do that, AV needs to truly converge with IT.”

This is where Crestron’s DM NVX enters the picture. “Running on a standard 1-Gig Ethernet, the DM NVX has multiple HDMI outputs and native USB 2.0 routing already built into the one box,” says Alex Peras, Product Manager of DigitalMedia at Crestron. “The benefits that were already part of DigitalMedia, such as EDID, HDCP management, DSP downmixing and a lot more, are part of the new DM NVX.”

With DM NVX, all AV can run on the building’s existing Ethernet infrastructure, which saves an enormous amount of money by not needing to purchase and install new specialized cable such as CAT-6a, CAT-7, or fiber. “Not only is there a huge cost savings in labor, think of one box [DM NVX] replacing large, fixed matrix switchers, USB extenders, HDMI switchers, and extra encoders,” says Peras.

Two reasons AV had been relegated to its own network were security concerns and that AV needed a proprietary infrastructure. With advanced compression technologies such as enabling 4K60 4:4:4 HDR on 1-Gig Ethernet and working with companies such as Intel (see “What’s Inside” below), these concerns have been addressed with DM NVX.

“The DM NVX runs on the same Crestron control platform everyone is used to,” says Peras. “And network-grade security is built in, including 802.1X, Network Access Control, SSH, TLS, HTTPS, and AES-128.”

Device configuration, firmware upgrades, and monitoring via the cloud are in the IT wheelhouse. “DM NVX will have native support for Crestron’s XiO Cloud,” says Jackson. Crestron has confirmed the firmware upgrade for DM NVX will be available mid-June.

“The cloud is hugely important to our industry and will be critical to a deployment on shared infrastructure,” says Jackson. “I think this will blow people's mind with the ability to do what we call ‘plug-in and provision.’ You can remotely configure the device ahead of time and without ever physically touching it. Once the device is plugged in and can reach the service, it will pull down its complete configuration.

Anybody doing a deployment for scale can set all this stuff up ahead of time, and then it just plugs in, and you get the configuration.” One of the biggest challenges of deployment is going through and verifying that everything actually works. “If management consultants came into our industry, it would blow their mind how much labor and effort has to go into deploying every single system. That's because as an industry we were forced to build things like the auto industry did before the Model T came along with the advanced production line. We as manufacturers needed to build better tools to enable the industry to grow. The ability to deploy, manage and monitor via the cloud is a game-changer,” says Jackson.

With nearly 50 years experience, Crestron has risen as the leader in enterprise AV control, automation, and solutions. Although it’s a privately held company, Crestron is no small firm. According to a January 2017 interview with Bloomberg, CTO Fred Bargetzi shared that Crestron was a $1.5 billion company. Most of that growth has come in the last six years; a 2012 Forbes article stated the company had $500 million in annual revenue.

“It wasn’t that long ago we had a hard time getting the best companies to talk to us, because we just weren't to that scale,” says Peras. “Now, it's radically changed. We have chip vendors and technology providers coming to us to help them with their roadmaps and guide them to build better solutions.”

The relationship with Intel culminated in DM NVX. It is an iterative build (a significant one) upon DigitalMedia that has been widely deployed, and technology features evolving since its release in 2008. “Every piece of technology that was in previous DigitalMedia products are present in DM NVX network video solutions,” says Peras.

In a statement in February 2017, Intel announced that the company was providing its Arria 10 FPGA devices for Crestron’s DigitalMedia NVX (DM NVX) technology architecture, which was demonstrated at Integrated Systems Europe (ISE) later that month.

The AV industry may already have too many speeds, feeds and acronyms to remember—but the IT world wrote the book.

The field-programmable gate array (FPGA) is an integrated circuit designed to be configured by a customer after manufacturing. The FPGA enables in-field firmware upgrades, eliminating the need for hardware upgrades and minimizing truck rolls.

“When programmable, customizable Intel FPGAs are built into these systems, they enable designers to re-architect enterprise networks to support collaboration for 4K, and ultimately [create] even higher-performance 8K networks,” wrote Erhaan Shaikh, vice president and general manager of the Intel Programmable Solutions Group, in an article discussing the DM NVX launch.

Crestron’s growth has allowed the company to manufacture products at scale. “A lot of what we do today is automated manufacturing,” explains Peras. “We have 3D X-ray machines to examine solder joints underneath chips where they aren't visible. These are complex manufacturing processes, and between that and our industry connections we're able to manufacture something that frankly is a lot more reliable than we would have been able to do five to 10 years ago.”

DM NVX may be a new product, but its 10-years of development has paid off. “Our RMA rate is so low that I can't put a number on it,” says Peras. “That’s in large part due to the fact that we've been designing products for so many years, we take the things we've learned and put it into the NVX. It gave us that ability to perform.”

It’s a global world, and with scale comes a global supply chain. “We effectively control all the factories that make our products, and that gives us tighter control over the entire supply chain.” Crestron has 90 regional offices around the globe and three distribution warehouses located in the United States, Belgium, and Australia. “Smaller companies have to go through distribution, making it more difficult to ensure quality,” adds Peras.

With rapid growth comes large-scale challenges. “We're at the stage now where we've sold so many NVXs that Intel is running out of supply of the particular chips we need. With the scale we're at now, and with our relationships, we're able to solve it with our supply chain,” concludes Peras.

Intel and Microsoft have booths at InfoComm, and it’s clear these IT giants have more than taken notice of the AV industry. It’s an exciting time.

Make sure you visit Crestron during InfoComm at booth C2562 to discuss these topics and learn how AV now runs on the enterprise network.

During the two weeks following InfoComm, watch for the last two of six installments of the InfoComm Networked AV Series, in which Jackson and Peras discuss Successful Web Collaboration, and Networked AV via The Cloud.

One of Six: Networked AV — More Than a Disrupter

Two of Six: Not All Digital AV Needs to be On the Network