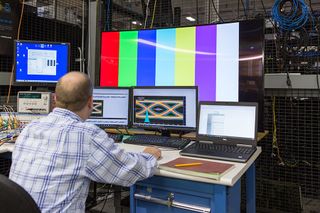 Remember the analog sunset? By all accounts the transition to digital was an industry disrupter. Yet few were fully prepared for the paradigm shift that followed: AV on the network.

Let’s step back a moment. Ten years ago, meeting rooms were called conference rooms, and few were outfitted with more than a star-shaped table microphone and a projector in the middle of the table that doubled as a room heater.

“Typically, you built AV equipment into your board room or a very high-end space,” says Daniel Jackson, the Director of Enterprise Technology at Crestron. For most of these projects, AV consultants worked on the design and the AV was installed by integrators. “A big job was getting 10 rooms, so it was very different mindset back then.”

Ten years ago, most manufacturers in the AV industry focused on a specialty such as control, switching, audio, video, lighting, and other standalone applications. Today, go onto the InfoComm Show site to the exhibitors list, filter by category, and you’ll see the same manufacturer or solutions provider in several.

Jackson says, “What happened was we saw this analog sunset coming where people were going to be forced to use digital, and that was basically predicated on the fact that connections on laptops were changing.” We’ve seen these progressions with composite video to S-video up to VGA. The AV companies had been about the need to connect different endpoints and adapting to the next iteration of connectors.

The analog to digital transition was a disrupter that took the AV industry a while to catch up with—and it took even longer for end users. You still see VGA connectors in some meeting spaces and classrooms. One of the reasons it took a while says Jackson, is because you had to throw away everything you knew about analog. “The analog stuff was put on a scope, it was all about bandwidth, you could troubleshoot each of the five wires independently, and you would bring all of your equipment and you could test things out.”

Most everything changed in the digital world. “You can't test, and you can't see the signal going down a cable,” notes Jackson. “You have to rely on the devices themselves to actually provide you the troubleshooting tools, which was a really major shift for the industry.”

Today network infrastructure is becoming as much a part of the AV vernacular as Cat5e. “The change is not being driven by what you connect to, it's about what infrastructure you run on, and that's a very different thing from just being a signal or connector change,” says Jackson. “If you look at when we introduced DigitalMedia in 2008, at the cost of a little bit more than an RGB switcher, it protected you for the future. We've had customers come back and say, ‘Thank you for saving us a million dollars because we would have had to rip all this stuff out in three years and put in new stuff anyway.’”

The shift to network video is the current frontier. Integrators and AV managers are facing a similar retraining challenge, notes Jackson. There’s much more to learn beyond, “Hey, I know how to do digital video, I know how to punch out RJ45s and test and troubleshoot this stuff.” Understanding the impact of AV on the network has become even more important.

Alex Peras, Product Manager of DigitalMedia at Crestron says, “Where we see [Crestron] differentiating is not just the performance or the video looking good or if you can run it on normal cable, but it’s the tools and trainings and everything that give people the ability to really deploy things on the IP network.” It's a skill set that the industry is going to have to learn quickly.

AV Over IP — A Sea Change and Opportunity

Once audio and video equipment made the transition to the digital realm, the AV world changed forever. Can you say “IT”?

Early-on, as soon as the term “networked AV” was mentioned, the first reaction from IT directors was, “not on my network.” This relegated most networked AV to VLANs, which in some instances was necessary.

Audio and video expertise will always be squarely in the hands of AV integrators and managers. IT directors are not looking to take on the responsibility of programming or deploying a control system or mastering the intricacies of DSP.

AV over IP is maturing quickly. AV and IT experts are learning to speak each other’s language, and they are taking a seat at the planning table together. With a better understanding of network security issues, determining quality of service and bandwidth requirements, AV integrators and managers are able to answer questions and ensure products can be properly tested before they are placed on the network.

Concurrently IT managers are answering the demands of management and the workforce to collaborate seamlessly and access audio and video without delay.

This sea change of networked AV creates opportunities far beyond what was possible just a few years ago. We’re only seeing the tip of the iceberg.

At the InfoComm Show three years ago, networked AV products were just making their way into exhibitors’ booths. As InfoComm 2018 approaches, it’s easy to see that most will be showing a full suite of networked AV solutions. The question is, are they capable solutions?

Watch for the second of six installments of the Networked AV Blog Series where Jackson and Peras discuss why “Not All Digital AV Needs to be On the Network.” Isn’t that contradictory to what we’ve been hearing? Stay tuned!