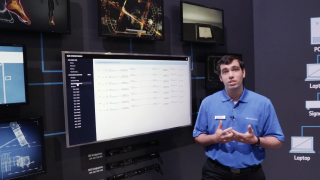 In our last blog we discussed the benefits of Crestron’s DM NVX, which runs on a standard 1-Gig Ethernet. Multiple HDMI outputs and native USB 2.0 routing are built into one box that supports stringent network security requirements.

To continue our conversation, we caught up with the Crestron team at InfoComm 2018, June 6 – 8 in Las Vegas.

Nic Milani, Director, Commercial Product Marketing at Crestron, recounted a conversation with a large automotive client. They stated, “Guys, one SKU—put one box on the shelf and that’s it.” Crestron’s traditional DigitalMedia infrastructure has more than 250 SKUs and proprietary cable that adds complexity. “In service to our customers and especially IT folks that understand scale, if you tell them you have one box that handles audio, video, control, and USB 2.0, it makes it much less expensive, while being easier to manage and maintain.” Crestron can now lead the capital expenditure discussion, similar in the way laptops and IT equipment are purchased. “The hardware is the day-one expense, now all of the sudden we start talking about day two, three, four, five, six,” adds Milani. “As an industry, I don’t think we do a good job about thinking of the soft cost.”

Imagine a scenario where a facility was built-out with an AV infrastructure reaching a hundred rooms, and the CEO decides the Town Hall meeting should be presented elsewhere, such as the lobby or outside. With a traditional system, it’s a no-go. Furthermore, even if you chose a networked AV system, if the supporting tools don’t exist, you’re in trouble. “You've taken what should be a flexible architecture, and because you don’t have the tools to manage those end points, it's fixed,” says Milani.

Enter the DM NVX Director, a single management appliance that as part of the Crestron platform allows users to configure, monitor, and manage all DM NVX’s on the network. “Director is the real-time management appliance for the NVX on the network and XiO Cloud,” says Alex Peras, Product Manager of DigitalMedia at Crestron. “All three of them offer significant savings in time, installation, programming, and ultimately cost.”

Think of DM NVX Director as a virtual matrix. “It allows you to provision all the devices on the network and allows you to group them into virtual matrixes,” says Peras. “You can separate transmitters and receivers, and from a single web-based interface you can see which inputs are connected, where the stream goes across the network, and which outputs those streams go to.” From the interface, support staff can see the resolution of each display. “If you’re managing a solution with hundreds of devices, you can see if the HDMI input or output is disconnected, or if the stream isn’t routed correctly.” Director provides the tools to manage routings directly from the page. “Anything can be done at the management level,” notes Peras.

An important feature of Director is its endpoint map. “It allows you to see all the groups of devices and their associated multicast addresses, if they are in transmit mode, and allows you to see the names and numbers associated with the device if they’re in receiver mode,” says Peras. “These numbers allow you to control the device from a Crestron 3-Series control system.”

While this endpoint map is traditionally static, Director allows endpoints to be dynamically changed. “Think about every input in a DM NVX as an input on this sea of endpoints,” says Milani. “Every output can subscribe to any one of those.” Say a company is doing a fundraiser and every display in the building needs to share the same digital signage feed. With a few clicks within Director, a user could broadcast their content to every device in the facility. “This gives you the ability to change things and make the system evolve and work for you,” says Milani.

In the end, it’s important that you think beyond the initial deployment and know how your evolving business needs will impact the infrastructure. Can your networked AV system adapt to your new reality?

Next week watch for the last of six installments of the InfoComm Networked AV Series, where we discuss Networked AV via The Cloud with the Crestron team.