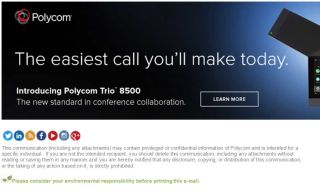 The What: Polycom RealConnect Service, a cloud-based video interoperability solution, now supports Microsoft Teams, as does the Polycom Trio and the Polycom MSR Skype Room System.

The What Else: Plantronics strengthens its support and momentum for Microsoft Teams for voice and video:

Polycom Trio now supports Microsoft Teams for meetings and calls by running the native Teams application for phones, providing a consistent user experience. Polycom Trio for Teams will be available in Q3 of the calendar year. Already adopted by 65 of the Fortune 100, Polycom Trio is driving digital transformation with its audio quality and functionality.

The Bottom Line: Customers use Polycom RealConnect to connect Skype for Business and Office 365 to standards-based endpoints. Albertsons Companies, a current RealConnect customer, pointed out the value of RealConnect. Polycom, now a part of Plantronics, launched a Microsoft Teams beta program with more than 50 enterprise customers for feedback on performance and reliability before release.