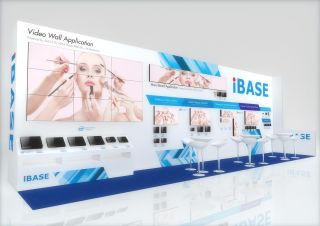 The What: Matrox Graphics and IBASE have collaborated on the SI-61S nine-monitor system. Designed specifically to drive 3x3 video walls for digital signage applications, this Matrox C900-powered bundle features nine HDMI ports and a dedicated graphics processor designed to power all displays as one contiguous desktop at the full 5,760x3,240 resolution. The solution is on display at IBASE’s DSE booth, 2849.

The What Else: In addition to I/O flexibility, resolution support, and GPU performance, the Matrox C900 card in the SI-61S supports video wall software expansion including compatibility with the Matrox MuraControl video wall management software, the Matrox NetAPI video wall development API, and a host of Matrox-compatible, third-party video wall control and management suites.

“Scaling HD or 4K content to fit across nine HD panels is a cheap and convenient way to power 3x3 video walls that are viewed from a distance,” said Samuel Recine, director of sales, Americas and Asia Pacific, Matrox Graphics. “But retailers, gaming houses and casinos, transport agencies, hospitality businesses, stadiums, and arenas are also putting video walls in windows that patrons pass only a few inches away from. At this distance, the effects of scaling are visible to viewers and powering each screen of a 3x3 video wall at its native resolution is unbeatable for visual acuity, fine text, very sharp lines, image clarity, and overall customer engagement.”