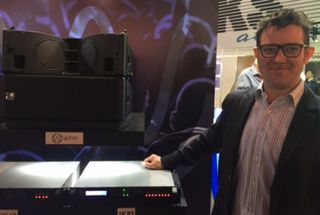 “Martin Audio’s MLA Series remains the definitive optimised array technology in the marketplace today, offering customers both the hard avoid feature (the ability to limit coverage in a zone by as much as 30dB) and the patented ability to optimise against multiple target functions – such as frequency response, SPL gradient and leakage, which no other competitor product can," said Dom Harter, managing director. “But the MLA family consists of fixed resolution systems and what we wanted to do with Wavefront Precision was to introduce a solution whereby customers could have a flexible and scalable approach to resolution and control of coverage. Simply put the more boxes with dedicated amplifier channels, the higher the resolution and scale of coverage control achievable. This means even at the lowest level of resolution the results are still fundamentally better than traditional line array, at no extra cost, and at the top end of resolution users can enjoy many of the benefits that MLA systems provide. Presently other manufacturers are forcing their customers to buy very expensive and fixed amounts of amps to optimise arrays, but with Wavefront Precision the decision on the level of coverage control, and therefore the number of high powered efficient iKON amps required, is the customer’s. This fundamentally changes the rule book and reaffirms once again our leadership in optimised array technology.”