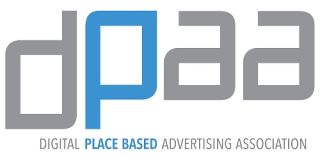 The standards will benefit all stakeholders - buyers, sellers, brands and the ad-tech community - by expanding opportunities for buyers to target audiences and purchase DOOH media programmatically. They have been produced in coordination with DPAA companies, with leadership provided by Prohaska Consulting and published on the DPAA's website. The standards have been reviewed by Demand-Side Platforms and media owners.

"In recent years, our annual survey of media planners consistently has shown that programmatic availability will lead to higher levels of spending on DOOH media, which is not surprising since programmatic boosts targeting ability, efficiency, speed of transaction and ROI," said Barry Frey, DPAA president & CEO. "These standards put DOOH in a leading position for programmatic adoption, providing exciting opportunities and enabling broad-based compliance that even television and radio have not yet achieved."

Frey said that many of DPAA's members already comply with the standards. This positions DSPs well to put this new functionality to work for their clients and their increasing DOOH budgets.

Prohaska Consulting was tasked by the DPAA due to the firm's understanding of the programmatic marketplace, sensitivity to the complexity of DOOH media and ability to coordinate with existing Open RTB standards. Prohaska Consulting facilitated communications among DPAA members and other constituencies, developed the standards, obtained and incorporated feedback, and encouraged consistency across the ecosystem. In addition to DSPs, the Outdoor Advertising Association of America and Interactive Advertising Bureau have also reviewed and weighed in on the standards.

"I would like to commend Prohaska Consulting for their outstanding work on this project," said Frey. They did a sensational job of bringing all parties to the table and helping us arrive at standards that address everyone's needs and concerns."

"We saw this project as a great opportunity to help the DPAA spur future growth by expanding the DOOH sector's participation in the growing programmatic marketplace just, as we saw over the last nine years in other digital media channels," said Matt Prohaska, CEO, Prohaska Consulting. "Programmatic targeting and transactions are playing an increasing role in the overall digital ecosystem. These standards will help ensure that DOOH networks will be active players in the programmatic marketplace.”

Boaz Ram, Group Manager, Product Management for Adobe's TubeMogul, was among the DSP executives who reviewed the standards.

"Kudos to the DPAA and Prohaska Consulting for the time and effort they put into developing these standards and extending automation to one of the last media channels relatively untouched by programmatic technology," Ram said. "Applying standards to digital-out-of-home advertising is critical for both media owners and media buyers in order to scale this important channel, and we are eager to see them implemented.”

"From an agency standpoint, there is no question that uniform programmatic standards for digital-out-of-home media will help level the playing field from a planning perspective," said Kaufman. "We look forward to seeing the standards become widely adopted and having the DOOH sector brought into the programmatic mainstream."

The tech specs committee developed a set of DOOH-specific standards that will facilitate how programmatic buys are conducted.

The creative specs committee produced the first version of the creative standards that allow advertisers to run across most DOOH networks with one set of creative assets as opposed to having to develop multiple units. The creative specs encompass the requirements for both still and video assets.