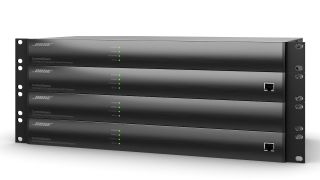 The What Else: They feature analog audio I/O—mic and line-level—and a Bose AmpLink output to send digital audio to AmpLink-equipped Bose amplifiers. Engineered for precise performance, each includes advanced signal processing with 48kHz/24-bit audio conversion, low-latency, and ultra-low noise operation. In addition, the ESP-880AD and ESP-1240AD feature integrated Dante audio networking as well as a front-panel RJ-45 Ethernet connection for localized configuration and monitoring.