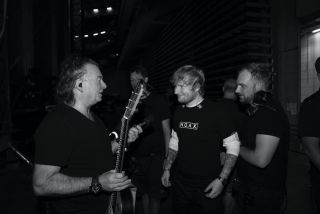 Autograph’s Ben Tredwell, who had already supplied other audio equipment to UK production company Major Tom for the tour, received a request to assist with an on-the-road upgrade to its comms system. Tredwell arranged a demo of the Clear-Com FreeSpeak II system at Sheeran’s Manchester concert, and subsequently delivered and assisted with the setup of the final configuration at the Newcastle show, just two weeks later.

The final package - all running on the 1.9GHz DECT frequency band - includes eight FreeSpeak II beltpacks, one Base II base station, four Active Transceiver Antennae plus a range of accessories including batteries, chargers, and headsets.

Dave White, Ed Sheeran’s RF Tech, said, “Being able to have a ‘real world demo’ from Autograph was essential for us to see if the Clear-Com system would be suitable for our touring crew and our existing tried-and-tested method of coordinating Ed's production. We need to have clear departmental communication as well as global coordination to be able to manage the last-minute changes that can occur with our show.

“Having Ben on site for two days was important for rapid deployment of the system. He helped us integrate the comms arrangement with our existing network and provided excellent advice on setting up in multiple venues. After our two-day introduction the order was placed, and within a week our new equipment was delivered and installed by Ben personally.”

Tredwell said, “The FreeSpeak II system provides even better results than originally anticipated - not only does it give them the flexibility they need, but the group feature allows them to have various teams talking to each other, while other users are able to have multiple private conversations simultaneously.”

Nicki Fisher, sales director EMEA, Clear-Com, said, “Finding the right equipment to suit a global tour can be challenging, particularly when the tour is already in progress. Thanks to Autograph’s expertise and the flexibility of the FreeSpeak II system, this process was as fast and effortless as possible for the production team.”