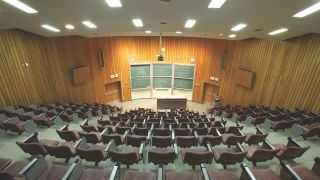 Lecture capture is transforming higher education, providing students and professors alike with tools to enhance and revisit lessons and for remote students to engage with the course material. (Image credit: Getty Images)

One of the most transformative technologies shaping higher education is lecture capture—providing students and professors alike with tools to enhance and revisit lessons, and for remote students to engage with the course material. More than one million videos are created annually with the Mediasite solution alone, with 40-plus-million views annually. Advancements, powered by artificial intelligence (AI) and augmented reality (AR), are promising to take this engaging technological category even further.

At an institutional level, Indiana University has been using lecture capture solutions since 2010. Since the first-generation systems were installed, “We've tried to make it available to everyone,” said James Scott McGookey, manager of collaboration technologies at Indiana University.

IU deploys lecture capture in various ways. Classrooms have their own installed PCs with software enabling lecture capture, so every classroom is capable of offering lecture capture at a minimum level. For IU, that translates into 700 classrooms, approximately. With lecture capture enabled across myriad spaces—from regional locations to departmental spaces to and university-owned classrooms—the uniting factor must be ease of use. As McGookey explained, “We've worked with our vendors over the years to create something that's incredibly easy to use.”

Joel Bennett, media services, Santa Clara University (SCU), is also managing a diverse array of capture spaces. “We have 70 capture stations,” he said. “The primary usage is classroom recordings, and we do about a thousand recordings per month across campus.”

SCU is currently using the Matrox Maevex 6020 remote recorder and Panopto VMS. From academic lecture needs to classrooms, “everything's distributed through Canvas—that's how the students access the content,” Bennett noted.

Why such a dramatic spike? Lieu has observed that when the technology first rolled out, faculty were hesitant to do lecture capture, because “they thought that if we distributed lectures online, students wouldn’t come to class. But we're seeing a bigger push from today's generation of students. They are actually pushing lecture capture, not as a tool to replace class, but as a tool to review it and get even more out of it.”

Customization where and when possible has been beneficial, said McGookey. He pointed to a pivotal moment a few years ago when IU made a vendor change. The team was then able to craft a software solution that would make lecture capture operation even easier for instructors. “When the faculty member logs into the in-room computer, they press the big red button. That's it. That's all they have to do to make a recording. You just can't make it any easier than that.”

First things first: For a lecture capture system to deliver its ROI, reliable cameras and proper microphones are vital. When it comes to audio, one size does not fit all. Acoustics vary from space to space. Audio’s inherent variables also affect lecture capture system design, so understanding the use case is paramount. What happens, for example, when one room houses a faculty member in the morning with an active learning class who wants to record every single conversation and every activity in that room, but the professor who enters the room next prefers straight lecture—recording no student engagements nor papers rustling? One best practice is finding a microphone system that is both reliable and flexible enough to meet the needs of both whole-room and single presenter capture.

For tech teams running lecture capture over a wired Ethernet infrastructure, having good network bandwidth on the wired network is absolutely critical.

Room-by-room management works for Wharton. As Lieu explained, “We tried to keep everything contained within a room. If we lose the network, video capture will still happen. We can still turn our rooms on and off without having to traverse the network just to be able to do so.” This approach helps Lieu make every classroom as usable as possible.

Wharton also deploys a lecture capture box in every single classroom, paired with Magewell capture cards, a system controller, and the room system all driven by a touchpanel interface.

While Wharton appreciates the room containment, Lieu noted that Wharton uses Panopto for lecture capture, equipped with a cloud-based service.

[How It's Done: Integrated Production Environments for Lecture Capture and Conferences]

“One of the biggest reasons why we use [Panopto] is because, even if our clients are not connected to the cloud, we're able to still kick off scheduled recordings, as long as the schedule got there before we lost the network. We can also start clients from our classroom touchpanel through RS-232 control, removing any dependency on the network.”

From Lecture Capture to Classroom Capture

IU thinks about the technology in the terms of “classroom capture,” not just lecture capture, because stakeholders want to promote active learning and keep everything deeply interactive.

There are many classroom activities that are not necessarily lectures that would benefit from a recording. For example, in a 100-level speech class, students can make their recordings using the same tools that faculty use for lecture capture. Students can record assignments or as practice for an upcoming presentation. “This is a shift for us,” McGookey said, “not to focus exclusively on the ‘lecture capture’ piece, and to think about enhancing engagement more broadly.”

A robust online program should incorporate best practices gleaned from instructional designers. Lecture capture should serve as a tool, not the core, of a cogent online learning experience.

Augmented reality (AR) and holographic projections are being explored in higher education as ways to enhance lecture capture and telepresence. Lieu expressed interest in technologies that might help to facilitate distance learning without students feeling like they are indeed distant, or “that you're being spoken to by a head on the screen,” he said. “Wouldn’t it be amazing to [project] a professor into the middle of the room to teach a class remotely?” he enthused.

While still on the bleeding edge, newer technologies like AR eventually do “come into the classroom and interact with our AV technology.”

The bottom line, according to Lieu: “We want to get away from the teaching through PowerPoint.” More fully featured classroom capture is one strategy.

Another driver for lecture capture is its relationship to accommodations vis-à-vis a school’s disability services. By having lecture capture tools in place, higher ed stakeholders can make it easier to capture what's happening in the room to get it closed-captioned or create transcripts for those students who require accommodations.

Scaling Up and Big Picture Planning

Phase one is making a system work in a specific classroom, but once a tech team starts to scale up, it can become challenging. A best practice is implementing a solution that users can grow with and scale up from the beginning.

At IU, standardization has been useful. “Standarization of AV in our classrooms has allowed us to scale,” McGookey said. “Coming up with those standards so that faculty know what to expect when they walk into different classrooms—a baseline of AV capabilities.” IU also tries to think about AV in the classroom holistically, putting “all the relevant people together on the same team so they can think about workflow.”

Standardizing doesn’t mean compromising on functionality. “Our systems are more complex and expensive than the average university's,” added SCU’s Joel Bennett. “We’ve standardized on providing a pan/tilt/zoom camera with control from our AV system for the end users, where a decent portion of the universities are just doing a fixed camera and sometimes a fixed USB camera in the room.” He is also moving to a Linux device. Prior to that, SCU had spent about 10 years running a Windows-based system with capture cards. With security updates, it's became unmanageable.

Having the right management tools in place is another key. IU is using Matrox appliances in about 60 classrooms; Matrox supplies the management tool for the team to monitor devices and usage, and push firmware updates when needed.

Tech managers are also watching AV over IP closely with relation to classroom capture. Imagine tapping into a live stream—any stream—and recording it.

Without one dominant standard, and proprietary solutions still quite popular, some silos remain. However, the industry is starting to see consolidation and interoperability. McGookey looks forward to a time when “we'll just have a camera that's a PoE camera that can stream out and be received somewhere remotely. Who knows where it's going to be received? That will be our lecture capture, but we're not quite there yet.”

What are Key Trends in Lecture Capture in 2019?

“Wider adoption of AutoTracking cameras and early adoption of AV over IP. Many schools are just now recognizing the cost savings that come from installing AutoTracker cameras and the improved video that results, saving on staffing costs and freeing the presenter to walk around. Early adopters of AV over IP are finding cost savings from simplified cabling. Also, nascent standards like NDI and Dante AV over IP will, eventually, take over from traditional SDI/HDMI implementations.” —Rony Sebok, VP, 1Beyond

What Do Younger Users Want?

“Generation Z students still want a traditional developmental college experience, but schools must figure out what that looks like in the ever-changing educational landscape. Technologies like streaming video have an unparalleled ability to deliver information where and when these digital native students want it. There is massive potential in higher education for artificial intelligence to offer the Netflix model for learning, a la using AI to suggest relevant videos and build personalized playlists. The future of learning will consider student preferences like how and when they want to learn and on what device.” – Michael Norregaard, CEO, Sonic Foundry, maker of Mediasite

Margot Douaihy, PhD, is a writer and editor based in Northampton, MA.