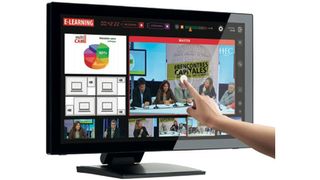 For most, presenting to a large group of people is daunting enough of a task without the added stress of operating the production equipment. Though depending upon the setting, lecturers and presenters may find themselves running some aspect of the production system while still remaining focused on the content they are delivering. This can include controlling a multimedia presentation, switching cameras, and even setting up recording and streaming functionality. In these cases, ease-of-use is paramount to the success of the presentation.

Streaming is a crucial piece to the lecture capture process, allowing distant learners to interact with the lecturer in near-real-time as opposed to simply watching pre-recorded content. The challenge with streaming is that, often times, it involves dedicated hardware requiring complex audio and video routing. Other times, a standalone encoding application or service will be used to deliver the video to the web. Depending upon the streaming encoder, this method might still require costly capture cards and advanced knowledge of streaming codecs.

A fully integrated production system alleviates much of the strain associated with producing a lecture or conference, allowing the presenter to better engage with the audience and keep their focus on the content of the presentation. One such way a production system can offer the user an intuitive environment is by reducing the need for external hardware units or standalone applications for streaming and recording. In the most basic example, a system would allow the user to control the recording and streaming functionalities directly within the systems interface.

Other systems will include some means of external control such as an API, giving the user the ability to control these functions from a web browser, phone, tablet, or dedicated control interface. This allows the presenter to make simple production decisions with a device located on a lectern, table, or even in the palm of their hand.

Often times with lectures and conferences, the production system may move from venue to venue, room to room, or may simply be used by a variety of different users. Each new user may use a different CDN or publishing platform, thus the ease-of-use must also apply to the configuration of the system. A presenter should be able to set up live streaming to Facebook Live, YouTube, and a variety of other platforms with nothing more than the stream and account information provided to them.

An integrated production and streaming system contains the encoder necessary to stream video to the web without the need to route the video output from one system to another. This model simplifies the workflow for the system's operator and reduces the possibility for error such as incompatible video formats, incorrect routing, or network issues. In a fully integrated environment, the video being produced is streamed directly to the desired endpoint instead of being passed to the dedicated hardware or software used for encoding.

The same concept applies to recording functionality. An integrated recording function ensures compatibility among formats while offering the user the flexibility to configure the settings to fit their needs. When publishing to a distribution platform, the user should not be encumbered by the many possible video formats or other technical specs of the video, rather the system should automatically provide conversion as needed for publishing the content to the web.

Despite the intuitive and reliable nature of integrated production and streaming systems, there are times when a dedicated streaming solution makes sense in the production workflow. A dedicated streaming solution may offer a set of features not supported in the production system such as a greater number of simultaneous endpoints, a variety of streaming codecs not otherwise offered, listener statistics, and alerts. In these cases, systems integrators must strike the right balance between ease-of-use for the operator and the need for the additional functionality.