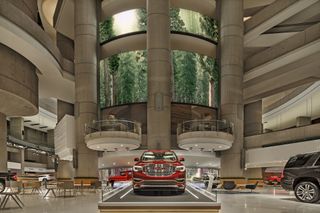 The seven interconnected buildings that comprise the GM Renaissance Center are an impressive sight on the Detroit skyline, but until recently inside GM World, the scene was less inspiring. A central piece of General Motor’s world headquarters, this vast atrium was an imposing space that was both difficult to navigate and, once a visitor or employee found their way around, there wasn’t much that expressed the history—or future—of the company. The scene is quite different as of the start of this year, following the reveal of a massive, two-year installation that brings technology and innovation to the forefront.

The winning concept from GM’s request for proposals came from Neumann/Smith Architecture and experience marketing house EWI Worldwide. EWI executives, including chief creative officer Chuck Bajnai, then tapped Bob Bonniol of MODE Architectural to contribute creative in the design development phase, while GMIT provided systems design and integration, and Ant Farm handled media production and post-production. Right from the start of the project, the teams knew it would involve an application of AV and interactive technologies as massive as the space itself.

“GM was quite aware that because the space was so large, we had a big opportunity to use screens, playback, and interactivity,” Bonniol said. “In the same way people use bricks and mortar to create a space, we were going to use pixels and code to help create that space as well.”

The premise, he explained, is that AV technology would be a fundamental layer of the space, allowing GM World to grow over time within the technology by using the power of expression it provides. To accomplish that, they investigated options like media servers and show controller systems, but ultimately realized the backbone of the project needed a custom solution. The custom-designed, artificial intelligence-driven Interactive Content Engine (ICE) is loaded with metatagged content, so the system can create unique experiences across the 17 large-scale LED surfaces.

“We leveraged AI technology that’s constantly building new, custom sequences on its own and doing it in a context-correct way, in a way that keeps things on theme and also makes it beautiful,” Bonniol said. We couldn’t create random sequences. We had to teach the software how to make choices that fit in with what the brand expects and wants. That was a little bit more black magic than it was just to teach a piece of software to grab content and put it in a sequence.”

The custom solution employs original live-action production, animated content, and more, all of which was mastered to resolutions exceeding 28K. It can provide not just specifically targeted content experiences, like an opening theme which corresponded with the celebration of Chevrolet’s 100 Years of Trucks, but also frequently changing content that remains engaging for the people who use the space regularly.

“They were very interested in not having people who are in that building every day experience fatigue in the space,” Bonniol said. “From the beginning GM asked what could we do to make it so if you went to the building every day at 9 a.m., you never see the same thing. You always have a different thematic experience of the space, every time you experience it.”

The ICE system is just one part of the massive install, which spans five stories and features reinforced concrete and long cabling distances, which required many structural and distribution considerations. To outfit the giant center column, which is nearly 300 feet around, they determined the pixel space needed to cover it was around 28,000 pixels wide.

“Ultimately, where we landed in the distribution of screens in the space was to make that center column the audiovisual totem pole of the space,” said Bonniol.

They positioned 16 6mm LED displays from Prismview around the column in quadrants, and at the bottom of the cylinder on ground level, where a recently refurbished turntable sits as a centerpiece of the space, a 4mm LED screen from Prismview completely wraps the column.

“It provides a really dynamic backdrop for the things we put on that turntable,” Bonniol exclaimed. “Prismview was fantastic. They have a lot of experience putting up big, expansive LED displays, but the scale of this space, the fact the screens were going to have to be curved to fit on the column, the proximity of people to the screens, the fact the space gets all of these different kinds of lighting conditions—there were a lot of considerations that went into selecting that product, and they made sure we were picking the right product for the right job.”

The team also realized they would need a powerful multiscreen routing solution, which led to selecting a Christie Spyder X80, which could handle the enormous resolutions involved. A Christie Pandoras Box media server allows them to leverage its widget interface to create custom input and output scenarios to help the ICE interact with the system, and they chose Barco’s Overture to create user-friendly interfaces so GM staff can easily approach the system. The show control layer is handled by Medialon Manager.

“That created an incredibly complex ecosystem of dependencies and connections,” Bonniol said. “We also knew we had to bring in a complete rock star team of programmers to deal with that, and indeed we did.”

Similarly, it was just as important to GM for this installation to help showcase the people who design the products they provide, as well as the products themselves. By connecting the worldwide work that goes into the company through this spectacular visual display, GM is achieving its goals.

“GM wanted to use the space to communicate, but also to inspire,” Bonniol concluded. “The beauty of the ICE system is the more content GM makes available to that system, the richer and more complex and more flexible the system is going to get, and, over time, GM is going to realize an incredible value from it.”