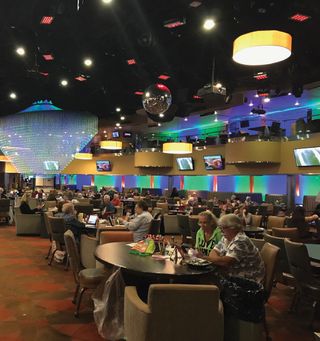 Pechanga Resort Casino, located in Temecula, CA, has the largest casino floor in the entire state, clocking in at a whopping 200,000 square feet making it bigger than the largest casino floor in Las Vegas. The casino features more than 4,000 slot machines, 154 table games, a non-smoking poker room, and an ultra-modern, 700-seat bingo facility. Opened in 2002 with the latest entertainment and gaming offers, the staff soon realized that the signage around the property was not meeting Pechanga’s high standards.

“When we first opened, and for a long time after that, we were using backlit fluorescent Mylar printed displays, and those were becoming archaic,” said Rick Gonzales, technical services manager for Pechanga. “Plus, it was a time-consuming, labor-intensive chore to change them out after every event, so we decided to go after digital signage.”

The casino’s initial digital signage experiences were not very positive. According to Gonzales, Pechanga’s initial foray into an upgrade was met with color engine issues chronic panel failures that triggered customer issues. “There were dead screens out on the floor, and we couldn’t have that,” said Gonzales.

The casino didn’t give up, however, and began looking for another option. Gonzales looked into “every major player on the market” and ultimately selected NEC Display Solutions as Pechanga’s new digital signage provider. Early deployments were “very small,” consisting mainly of digital displays showing content above static backlit maps, and a handful of other displays peppered throughout the property, but as the casino expanded, it incorporated more digital signage elements. In 2004, Pechanga added an additional 80,000 square feet of gaming space and built new entertainment options, both of which prominently feature NEC displays and projectors.

Pechanga now has 155 P-series flat-panel displays throughout the entire casino and resort, including in Kelsey’s Restaurant, the Round Bar, Pechanga Bingo, at the ends of slot machine banks as end caps, in elevators, and more. The displays show house-created content as well as promotions, upcoming events and information about Pechanga, and broadcast television and sports games in the bars.

The Bingo Hall features NEC displays that stream the bingo feed around the circular hall, as well as a large screen at the front of the hall onto which the feed is projected with an NEC PA653UL laser projector and NEC PX700W projector. The Round Bar uses an NEC PX700W projector to project television programs and sports games onto a 16x9 drop-down screen.

The Round Bar was designed with a focal point called “The Beacon” in the middle—an approxi-mately 60-foot-tall stained glass structure encircled by eight NEC P463 46-inch flat panel displays. During showings of major events like pay-per-view fights or major sports games, the bar has a motorized drop-down screen onto which it can project content.

“When we used static signage, we had instances where the Mylar backlit signs were still showing events that had been over for a week,” he said. “With digital signage, the minute an event is over, the display updates to new content, so it helps with guest satisfaction because it keeps everything up to date in real time.”

Pechanga hosted the grand opening of its $300 million resort expansion earlier this year, with all meeting rooms and break-out rooms featuring 15 NEC NP-PA803U projectors to amplify engagement during events. At the vast pool complex, cabanas offer guests 40 NEC P404 displays in weatherproof encloses. The P Series was chosen for the pool cabanas for its high brightness, which will allow visibility even in sunny weather, Gonzales said.

“Something we always tout here at Pechanga is uptime and customer service, and I can’t say enough that NEC has exemplified both of those,” Gonzales added. “That’s why we’re still with them.”