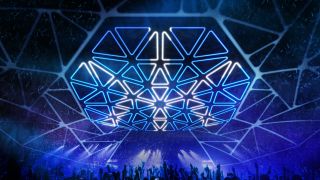 Bars and nightclubs do much more than just serve martinis and play music—they provide spaces for groups to celebrate and make new memories together. As more of our energies are poured into digital realms, physical hubs like bars and nightclubs are reasserting themselves. Integral to this cultural reimagining are new AV tools, light sculptures, dramatic projection mapping, and sound systems so electrifying, guests can’t help but come back for more.

More Than Just A Bar

Ron Moore, vice president of Automation Arts, the project’s AV installer, explained that Mecca is part of an ongoing project that will see the addition of new restaurants and parking structures in the area. “It’s all about bringing the community together to one place to watch games and enjoy. There’s a beer garden with a big outdoor video wall,” he said. The project’s goal is that everyone who enters the space feels welcomed into the excitement.

The bar is of special importance to fans of the Milwaukee Bucks, and a “direct link to the Fiserv Forum,” Moore enthused. During a Bucks game, Mecca’s own in-house DJs manage the event. During commercials, installed cameras capture the revelry around the bar and feed it to the giant video wall installed by Automation Arts, with the addition of light special effects. “It’s a such an amazing experience—it’s more than just a bar,” said Moore.

Mike Stocklin, director of engineering and programming at Automation Arts, appreciated the unique challenges of the Mecca project, such as “trying to design a game-day, arena-style experience in a modern sports bar.” Features including the “kiss cameras, arena-size audio, alpha video processing for video effects, and the enormous video wall make people feel like they are in the arena and a part of the action,” he said.

The collaboration between the Automation Arts team and the end users “drove the design of the system,” Stocklin added. “New ideas were still being discussed and implemented even after the opening” in May.

Gerardo Gonzalez, technical director of Hakkasan Group, is an integrated experience expert. He oversees nightclub production at Hakkasan Nightclub within the MGM Grand Hotel & Casino in Las Vegas. Elements of the five-level venue include the Ling Ling Club, the luxurious Ling Ling Lounge, the main nightclub, and a pavilion. In partnership with its marketing and promotion teams, Hakkasan sets nightclub trends. But agility is important. “It could be one thing one day, and then next week it changes into something completely different,” he said.

The team at the Mecca sports bar took a similar show-stopping approach. “We installed a 38-foot diagonal, direct view Daktronics LED wall,” said Moore, “and then we have about 125 feet of LED ribbon that runs the width of the bar. [The bar owners] will run advertising or phrases on the ribbon, like ‘Go, Bucks, Go.’” Not only is it a high-octane, immersive experience to watch a game at Mecca, “It’s actually better than being at the game,” Moore said. “It’s fun. There’s good food and drinks. There’s great music during time-outs. You feel like you’re there without having to sit in the arena.”

Sound plays a central role in the overall experience of a nightclub, said Pablo Espinosa, vice president and chief loudspeaker designer at Meyer Sound. “When you talk about sound quality, you need to talk about what good sound really means. It’s not just pristine sound—it’s about the emotional transport of the music.”

Achieving transcendent sound is both a science and an art. One of the technical factors is low distortion. “At very loud levels, distortion becomes excruciating—you tire very quickly,” he stated. “The other factor is dynamics. Club music needs to have very high dynamics, and the sound system needs to reproduce those high dynamics—the limiters and all the internal protection diminishes the full experience.”

Another important element is low frequencies—very impactful, visceral low frequencies. “Customers are requesting this more and more from loudspeakers. It is especially important in [nightclub] markets, particularly for the continuous high levels,” Espinosa said.

Being able to deliver these characteristics makes Meyer Sound’s loudspeakers multipurpose solutions, said Espinosa, because they are designed to reproduce any kind of music. “Whatever type of music you are playing, the speaker will be able to reproduce it without adding anything or taking anything out.”

For the Hakkasan team, finding the balance between sleek design and technical prowess was key. Hakkasan enlisted several leading international design firms, including Gilles & Bossier from Paris and New York’s 212 Design, to create an immersive five-level space that offers a variety of atmospheres. Therefore, speaker placement had to be technically accurate and aligned with the distinctive aesthetics of each area. “You have focal points of the nightclub, like the DJ booth, the bar, the dance floor, and the entrance hallway,” said Gonzalez. “Everything has to have its own build so you can lower or raise the volume as needed. The dance floor is where your main sound is going to come from. You do not want your dance floor to be too close to the bar because DJs are going to turn up the volume.”

In sports bars, audio must be synced precisely from display to display—inside and outside—so there’s no apparent lag. You don’t want fans outside in the beer garden cheering and roaring at a free throw spoiling the excitement for patrons inside, whose screen is showing a delayed signal.

While anyone can watch the Super Bowl at home, there is a growing appetite for social experiences that cannot be found in a living room. Bars and nightclubs are punching up their offerings, not just in terms of the audio and video devices they install, but the integrated experiences they promise.

“As venues such as Mecca continue to emerge, I think we are going to find the demand for unique AV experiences expanding,” Stocklin said. “These experiences will be essential for enticing potential patrons to the venue.”

Gonzalez explained that the Hakkasan Grid at Hakkasan Nightclub, which was designed by WHITEvoid,  is a “centerpiece that can transform with the musical landscape, creating infinite shapes and colors above the dance floor. Some of the custom-designed triangles are 3D-mapped with premium materials by the brand Kinetic Lights from Berlin.” The light art installation is complemented by floor-to-ceiling LED screens.

Watch the video below to see the Hakkasan Grid in action.

“We’re not going to be able to pull people away from their phones,” he said. “People are going to [post on] Instagram, and they are going to tweet.” Knowing this, the team consciously wove social media perceptions into the rendering phase. “We actually put a rendering of the Grid inside a phone to see how it would look in a social media post.”

Gonzalez added, “What makes this one-of-a-kind is the pixel mapping and color mixing technologies. The structure allows fully customized images and patterns to flow seamlessly across all triangles. That means we can have the signal going to the Grid, and you will have the same pattern moving from one side to the other. The performance amplifies the energy, creating an unforgettable experience for guests.”