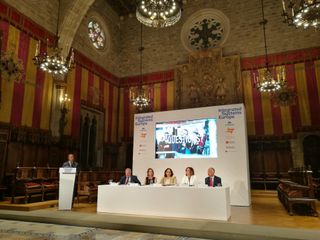 In case you (somehow) haven’t heard, ISE is moving.

From 2021, the world’s biggest AV trade show will wave a fond final farewell to the RAI Amsterdam after 14 years, relocating 1,000 miles south to the warmer climates (even in February) of Barcelona.

Welcoming the show with its open arms (and its estimated €470 million injection to the local economy), will be the Gran Via. With 200,000 sqm of space (almost four times that of the RAI), it’s one of Europe’s largest purpose built exhibition centers, capable of accommodating north of 110,000 visitors and 2,400 plus exhibitors inside its eight giant hanger-like halls.

The move has been well received by the AV industry, many of which have joined ISE on its (said) journey since it began life in front of just 120 exhibitors and 3,500 visitors in Geneva before going Dutch.

Since then, ISE—to borrow a quote from Blackman—has mutated into a “beast” of a show, with its latest installment again smashing all records before it, attracting close to 81,000 visitors and 1,300 exhibitors.

“When I was headhunted and asked to take a look at the opportunity of launching ISE, I thought it was interesting and had the potential to grow,” reminisced Blackman. “But I could have never imagined it would grow this big and this fast into the beast that it is today. It’s gone way beyond my expectations. It’s way beyond anyone’s expectations!”

And it’s not about to slow down anytime soon, which has forced its hand into buying a one-way ticket to Spain following ISE 2020. The AV industry continues to grow at pace as it continues to play a greater and more intrinsic role for businesses and consumers alike, particularly when discussing experience.

According to figures published by ISE’s parent company AVIXA, the AV industry worldwide generated $178 billion in 2016. Through to 2022, it is expected that global AV revenues will increase 4.7 percent annually, creating an additional $52 billion in value during the remainder of the forecast period.

“We’re lucky because we’re in an industry that’s ever evolving,” said Blackman. “The channel probably won’t increase that much, but for the buyers, that’s where we’ll continue to see a rise."

Each year, attendance numbers continue to rise by around six percent, a trajectory which could see numbers reach 100,000 by 2021. In addition, demand for space from existing, new and prospective exhibitors shows no signs of abating and remains a constant battle.

To put it simply, the RAI has become a victim of ISE’s success, with demand now outgrowing supply.

Even the addition of Hall 15—the country’s largest temporary pavilion—adding 11,500 sqm of extra space (taking totals above 55,000 sqm) during this year’s show, failed to alleviate the problem.

Blackman revealed that Hall 15 allowed exhibitors with stands covering less than 200 sqm, the option of taking an additional 30 sqm, should they wish. Many of them did, resulting in a number of smaller stands (10-12 m2) were forced out, something ISE hadn’t foreseen with the addition space from Hall 15.

As a direct consequence, ISE had to turn down 144 different companies that wanted to exhibit—a gut-wrenching and frustrating prospect for any business.

“When we decided to put on the big pavilion [Hall 15] at the front of the RAI, it filled up straight away,” explained Blackman. “That really caught us off-guard, because we felt we still had space to grow. Sadly, we were faced with a situation that meant we couldn’t accommodate everyone, and those smaller stands at the bottom of the list no longer had a space to exhibit. It’s terrible to think you’re turning business away, but we didn’t have any other option. We’ve helped to rectify that by taking another pavilion for ISE 2019, which will accommodate some, but not all of them. It’s a constant firefight.”

It was this predicament that proved to be a defining moment for ISE in Amsterdam, with the decision to leave decided in April, just a couple of months following the conclusion of ISE 2018. The RAI was informed of the decision in May.

Plan B kicked into gear 18 months ago, starting with ISE holding numerous discussions and conducting surveys with selected exhibitors and attendees to get an accurate consensus from the market on their feelings towards the show remaining at the RAI and a possible move away.

During this time, Blackman also began visiting and holding discussions with leading venues in all leading cities across Europe to find a suitable replacement and accommodate its long-term plans.

Whilst space was a primary need, there were a long list of others requirements to factor in before a final decision could be made. These included securing the availability and reasonable pricing for hotels, transportation both to Barcelona, and getting to and from the show, amongst others. All things considered, the Gran Via was the outstanding choice.

“We looked at all the major European capitals to see what they had to offer in terms of their facilities, infrastructure, accommodation and all those sorts of things," Blackman said. "After we’d decided Barcelona was the place we wanted to go we had to first make sure the total package was right for everyone. That needed to be agreed before we signed anything—otherwise we wouldn’t be in a strong negotiating position."

He continued: “The hotels were a key part of that, because we didn’t want the news to come out that we’re coming to Barcelona and all the hotels saying (rubbing his hands), great, we want €500 a night during that week. We worked closely with the venue and the mayor and everything is in place. It’s going to be a great venue for us.”

Wrapping up our chat, Blackman admitted he has plenty of sympathy for those at the RAI who have, in many ways, joined ISE on its growth journey—although he concedes he may, to some, come across as something of a bad guy.

With ISE being the largest trade show held in the city, he knows the void being left will be difficult to fill, both financially for the venue and the wider city.

He revealed ISE could have made its exit from the RAI at the end of next year’s show (2019), but has instead opted for an additional year (2020), increasing the chances for the RAI to secure a replacement.

“It’s like a rental contract with a house,” Blackman explained. "You don’t want to leave someone in the lurch, so we’ve given them time to go out to the market with a free slot in 2021. We’ll be doing other things there in the future, too, so we want to maintain a good working relationship. The RAI has been and remains a great partner for us. I’ve always been straight with them and they’ve always been straight with us. It’s a great city and its really embraced ISE over the years."

“I’ll always remember speaking to a taxi driver, who told me that the busiest time of year for his was during ISE, joking the rest of the year, we [fellow drivers] eat hamburgers, but during ISE, they eat steak," Blackman mused. "It showed the impact we have on the city and the people within it. It wasn’t just a show in February, it was ISE. The whole city has embraced us. In the buildup to a show, you see restaurants and bars displaying signs saying ‘ISE Builder Special’ Our leaving will create quite a vacuum."

“The ambition now is to replicate that in our new home," Blackman concluded. "We’ll miss Amsterdam, but the long-term future for ISE is in Barcelona.”