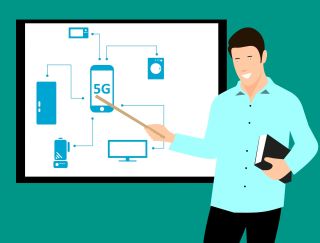 There has been a slew of articles about 5G over the last several months. Some are touting the coming evolution of wireless technology as the end-all-be-all; others have looked at the technology itself to consider its flaws. I’d like to put the myth of 5G to bed and tell you that it will be of no real use to the audiovisual industry for the next decade, if ever.

5G has been touted by its proponents—companies like Ericsson, AT&T, Verizon, and even the Federal Communications Commission (FCC)—as a race that the United States must win against China because it will have a significant economic impact on our country and the world. This is true. The U.S. saw incredible benefits as a leader in the evolution of 4G wireless technology. More jobs, more industry, and more development came from the country leading the efforts.

What is not true, however, is the description of what 5G will offer to consumers. The wireless carriers have all been promising that 5G will offer transmission speeds of up to 10 Gbps, a significant jump from the 300 Mbps available with LTE transmission. That may technically be true, but those results were achieved in a lab under optimum conditions and with all wireless channels available; they almost certainly don’t reflect a real-world scenario. Rather than focusing on the promised data rate, focus on the promise of “up to.”

The other promise of the technology is the improved bandwidth capabilities of 5G over its predecessors. Again, we must look to the fact that this technology is untested and unproven in real-world settings.

There is a finite amount of wireless spectrum available. It has been determined that the wireless spectrum in the United States is owned by the public—that’s right, it is all yours. Only, the government licenses it out to those who wish to use it. Many will likely recall the wireless microphone frequency reallocations that the industry has gone through, twice, in the last decade. The FCC has the authority to determine that spectrum has better uses and reallocate it for those purposes.

On Nov. 18, 2019, FCC Chairman Ajit Pai announced that there would be another public spectrum auction for what is known as the C band, or the spectrum between 4 and 8 GHz. This announcement was a big deal for two reasons. The first, which may be less important to some, is the fact that it will be a public auction rather than a private auction. The second, though, speaks to the point of why 5G is not what wireless carriers are saying it is—they don’t actually have the frequency allocation at this point to deploy 5G on a widespread basis. The auction won’t take place until sometime in 2020, which means it’s unlikely that the spectrum will be available for use in the United States for at least another two to three years.

The term “digital divide” refers to the fact that new technology is typically deployed in densely populated urban areas, leaving citizens who live in sparsely populated rural areas at a technological disadvantage. The digital divide is widening and 5G is being promoted as the technology that will help close it. However, that promise is a marketing ploy: it is unlikely that rural areas will see widespread 5G deployments in the next decade, if ever.

5G can be deployed using small cell towers rather than building out the large cell towers used for 4G/LTE, which is a much easier solution. The issue, though, is that because of the frequency allocation that 5G plans to use, the density requirements of the towers goes up significantly. The smaller waveform means that it a 5G signal is much more prone to environmental interference, is not able to penetrate walls as well (if at all), and will, therefore, need more frequent repeaters.

In a city, it makes economic sense for the wireless carriers to deploy as many small cell towers as possible to serve a large population. However, when you have a dozen customers potentially located over several square miles, the wireless carriers have shown that they are less willing to make the investment because the return just isn’t there. For that reason, 5G will not close the digital divide; it will, in fact, widen it.

Further, it is likely that in order to take advantage of the 5G data rates, wireless carriers will charge customers a premium . The digital divide isn’t only a rural versus urban issue—it’s also an economic issue. Lower-income households will be less likely to be able to afford the higher cost of improved data rates, widening the gap between the haves and the have-nots.

5G is an immensely powerful enabling technology that, if deployed in a manner that makes it widely available, dramatically pushes the Internet of Things (IoT) and overall communication forward. Faster data rates and more bandwidth allow more people to be connected, more students to get access to information, more job seekers to hunt for employment, and more innovation of connected technology.

At the same time, 5G is in its infancy in the United States. The frequency spectrum isn’t available yet. The technology is unproven in the real world. Physics tells us that the technology is going to struggle in urban environments because of the size of the waveform, though availability will be limited primarily to urban areas, leaving the rural ones further behind.

The audiovisual industry should watch the 5G evolution cautiously and carefully. There is an immediate opportunity, assuming your company is interested in deploying in-building digital antenna systems (DAS) to overcome the wall penetration issue, but the uncertainty of the spectrum auction and the unproven technology should not be relied on as an available future.