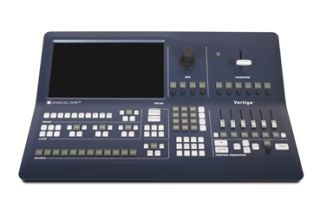 The What: Analog Way has announced the Vertige, a new remote console designed to control Analog Way’s LiveCore and Midra series of mixers/seamless switchers.

The What Else: With a brand new design and an innovative approach to show creation and management, the Vertige console will help unleash the full potential of the switchers controlled. In addition to the Web RCS and RCS², two intuitive user interfaces designed for the LiveCore and Midra series, the Vertige offers a new creative remote console for wide single or multi-screen configurations. Vertige presents a large operations panel of 510mm depth and 740mm wide (20”x29.2”), showing different sections to set-up and control a show: Source, Layer, Preset, Edit, Control and Transitions. These sections feature direct keys, contextual buttons, sliders, knobs as well as a joystick and T-Bar to operate the Console.
In addition, Vertige includes a large 16/9 TFT color touch screen allowing the display of the program, preview, and content snapshots on the same page. The representation of the whole scene on the touch screen will be particularly valuable when working on multiple layers from different screens simultaneously.

The Why: “When conceiving the Vertige console, we carefully thought out its design, ergonomics, and functionalities to make it capable of controlling a wide range of our mixers” — Franck Facon, marketing and communications director, Analog Way.