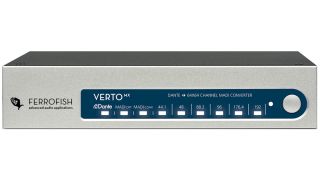 The What: Synthax, the Americas distributor for Ferrofish, has introduced the new Ferrofish Verto 32, Verto 64, and Verto MX Dante format converters. The Verto 32 and Verto 64 offer ADAT (32x32 or 64x64 channels) while the Verto MX has MADI. With the ability to integrate ADAT and MADI into an existing Dante network, the Verto converters feature word clock I/O for external synchronization and can be remotely controlled.

The What Else: The Ferrofish Verto series can be remotely controlled via the Dante network. If all devices are connected via MIDI, the Verto converts all Dante audio streams to ADAT or MADI and the control commands are sent over Dante into MIDI remote control messages. The Verto MX offers an additional feature: instead of a separate MIDI port, the MIDI messages are extracted from the MIDI-over-MADI port.

For recording studio applications, the new Verto 32 and Verto 64 can convert both ADAT and MADI to the Dante format while the Verto MX is well suited to broadcast environments where 64 MADI channels can be easily converted and placed on a Dante network.

“The new Ferrofish Verto 32, Verto 64, and Verto MX make integration of digital ADAT and MADI into an existing Dante network easy,” said Mathias von Heydekampf, managing director at Synthax. “Each model addresses the most commonly encountered channel counts, provides word clock for synchronization, and are easily remote controlled. No matter what professional AD/DA convertor one uses, the new Verto Series digital converters connect easily via ADAT or MADI—making them very intuitive to use.”

The Bottom Line: The Verto 32 and Verto 64 models support sampling frequencies ranging from 44.1kHz–96kHz, while the Verto MX supports sampling frequencies from 44.1kHz–192kHz. All three Ferrofish Verto devices offer one 5-pin MIDI port each for input and output. Similarly, all three models provide one BNC word clock input and one BNC word clock output for synchronization purposes, and each model is housed in a compact 1RU/half-space enclosure.