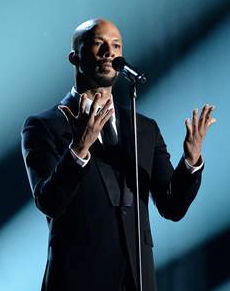 Rapper Common performs 'Glory' onstage during The 57th Annual GRAMMY Awards at the STAPLES Center on February 8, 2015 in Los Angeles, California. (Photo by Kevork Djansezian/Getty Images)
From the hard-rocking opener by AC/DC to the poignant closing performance of “Glory” by John Legend and Common, Shure wireless microphone systems, wired mics, and in-ear monitoring systems were a near-constant presence. As always, musicians were permitted to use their preferred microphones for their performances.

Although artists brought their own custom earphones, all but one of the in-ear monitoring systems used were Shure PSM1000, with 24 channels split between two stages. With its unique diversity bodypack receiver, the PSM 1000 offers an extra measure of RF protection with exceptional audio quality.

Both Shure Axient and UHF-R wireless systems were in use. AC/DC selected Axient for lead vocals and Angus Young’s guitar, with backing vocals on UHF-R systems with Beta 58A capsules. Axient handheld systems were also selected by Sir Paul McCartney (Beta 58A), Adam Levine (SM58), Juanes (Beta 58A), and Pharrell Williams. With its superb sound quality and remote control of all transmitter functions, Axient has the unique ability to detect and avoid interference.

“We tried the Axient systems in rehearsals and were very happy with the way they sounded on both guitars and vocals,” said “Pab” Boothroyd, FOH engineer for AC/DC and Paul McCartney. “Requesting them for our GRAMMY performances was an easy choice.”

Shure UHF-R systems, which have a long history of GRAMMY success, were used by Sir Tom Jones, John Mayer, Usher, Eric Church, Rihanna, and Common. In addition, the podium microphones were powered by Shure UR1 bodypacks, eliminating the need to run cables across the stage.

Of course, not all vocals were wireless. The Beta 58A was the microphone of choice for Hozier, while the classic SM58 was selected for Brandy Clark’s performance with Dwight Yoakum, for Sia’s theatrical performance, and backing vocals on several numbers.

Another first for this year’s GRAMMY telecast was the use of Shure Beta 181 microphones on acoustic pianos. The move was suggested by co-broadcast music mixer Eric Schilling and FOH music mixer Ron Reaves, who said, “It’s the best piano sound ever, and they were the only piano mics we used on the show.”

Eric Schilling explained, “After Ron Reaves tried them out on the Latin GRAMMY Awards, we both agreed that we wanted to use the Beta 181 in all the pianos on this show. They have such a pleasing top end and great rejection. There was very little we had to do to them.”

Shure Artist Relations Manager Cory Lorentz was in Los Angeles for the event, touching base with the Shure endorsers and users who were present and supporting the audio team. “The GRAMMY Awards always has an amazing production team, and it’s an honor to see them at work from rehearsals through the live broadcast,” said Lorentz.