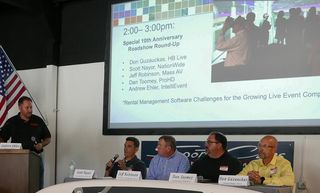 The keynote for the Roadshow was presented by one of the most successful entrepreneurs in the staging world, Gary Becker, founder of Nationwide Wholesale Video, which he sold to Christie a few years back. At his keynote Becker outlined the fundamentals he's paid closest attention to, those that have led to consistent replication of enterprise growth, employee loyalty, and customer delight at the businesses he’s run. In a refreshing change from many keynotes at events, Becker focused on what should be every exec’s priority: “commitment to helping others find their way to their best." Not wringing the best from employees, but putting them on a path and in a position to find that for themselves.

Bill Beck of Barco (on right), explaining some of the finer points of his LED projector presentation, to an attendee.

Following Gary Becker’s keynote, Roadshow attendees got to hear from an expert who is probably the world’s top authority on laser projection. On the eve of InfoComm 2014 Barco announced that laser light source video projection expert Bill Beck joined Barco’s projection development and marketing efforts. Before he joined Barco, and in the two years since, I’ve always been impressed by Bill’s technical knowledge of laser light source projection, as well as regulatory and marketing issues. Beck was one of the first to recognize the potential of laser illumination for premium digital cinema. And that foresight has paid off. In his presentation at the Monterey Roadshow, “Laser Phosphor vs. Conventional Projectors, for Stagers: the Myths and the Realities”, Beck predicted that “Laser Projection will outsell Xenon within 2 years”, because of: rapid adoption driven by global Cinema market; the full range of laser phosphor and RGB projectors available now; large production volumes going forward; and improvements in reliability, performance, brightness. Beck addressed “myths” surrounding laser phosphor:

• Not bright enough?
- Reality: there are 30,000 lm projectors available today
• Bad color?
- Reality: Rec.709 colorspace, for venues ( DCI P3 for Digital Cinema – wider gamut)
• But will it work in a blend?
Reality:
- Dimmable down to 30%
- Uniform brightness to the edges
- Stable brightness over time
- No flicker

At the special session "Rental Management Software Issues for the Growing Staging Company", Andrew Ehler of Intellievent (standing, on left) led staging company end users in a discussion of the challenges of finding and properly implementing the right rental management software package for your staging company. Those panelists, were, left to right at the table, Scott Nayor, NationWide; Jeff Robinson, Mass AV; Dan Toomey, ProHD; and Don Guzauckas, HB Rentals.

Co-host, and Venue provider of the Monterey Rental & Staging Roadshow was Extreme Impact– maker of what is probably the best-known and most widely used rental management software in the Industry. Extreme Impact’s HQ in Monterey, CA, was the setting for the event. And it’s hard to say what was most impressive about their HQ– the fact that it’s a block from the Pacific Ocean, or that their office neighbor is one of the most prestigious purveyors of classic cars on the west coast. And in fact, the Roadshow was co-located this year with the IntelliEvent User Conference, an annual educational and networking event for current and future patrons of IntelliEvent software applications, that offers a good opportunity to meet with the team behind some of the most innovative management tools on the market today.