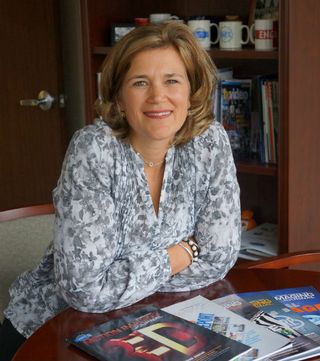 Barbara Lange, Executive Director of SMPTE
TSC takes place April 5-6, the first two days of the 2014 NAB Show in Las Vegas. Dave Schnuelle, senior director in the office of the CTO at Dolby and former chair of SMPTE Technical Committee 21 Digital Cinema, will serve as the chairman for the summit. The program committee includes several program committee members from the successful 2013 event, plus other industry notables.

The 2014 ETIA Conference, which will be held once again on the Stanford University campus, is scheduled for June. SMPTE Education Vice President Patrick Griffis will join Joyce Farrell, executive director of the Stanford Center for Image Systems Engineering (SCIEN), to head up the conference program committee.
For the society's flagship event, the SMPTE 2014 Annual Technical Conference & Exhibition, Paul Chapman, senior vice president of technology at FotoKem, will serve as chairman and Jim DeFilippis, CGO at Technology Made Simple consulting, will serve as vice chairman. The conference will run from Oct. 21-23 following a pre-conference symposium on Oct. 20.