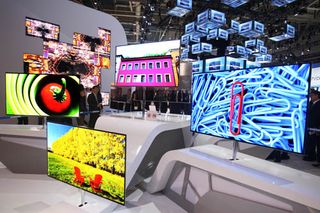 Super OLED technology eliminates the need for a color filter as the OLED pixel unit comprises self-emitting RGB sub-pixels laid directly on the display panel, each emitting its own light. The technology is also able to differentiate varying degrees of blacks and shadows to allow for fine detail even in the darkest of scenes.

The Samsung Super OLED TV, a Best of Innovations Award Honoree at CES 2012, will be on display at the 2012 International CES, booth #12004, in the Central Hall of the Las Vegas Convention Center (LVCC) from January 10-13, 2012. It will be available commercially worldwide this year.

Samsung’s Super OLED TV features vivid and true-to-life picture quality in both 2D and 3D, with improved color accuracy compared to conventional LED TVs. Since light output on the Super OLED is controlled on a pixel-to-pixel basis, truer blacks and purer whites can be achieved.

Because Super OLED technology features self-emitting RGB sub-pixels which do not require a backlight, the TV weighs significantly less than a standard LED TV.