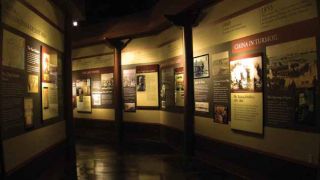 FREDRICKSBURG, TX—The National Museum of the Pacific War George Bush Gallery was recently renovated to expand the gallery’s footprint to 33,000 square feet. The museum asked Bowen Technologies of Indianapolis, IN to update the gallery with the latest in AV and information technology to provide visitors with a unique experience.

The National Museum of the Pacific War George Bush Gallery was recently renovated to expand the gallery’s footprint to 33,000 square feet.

For several years, the museum had been playing with the idea of expanding its technology in order to reach visitors on a deeper level, as Brien Norris of Bowen Technologies notes. “The goal of this renovation was not to ’wow‘ the visitor with the technology, but to immerse them into the information being provided so that they could leave with a better understanding of what this campaign was like for the U.S. and how it impacted the world as a whole. The story includes media-rich presentations, meaningful testimonials, and historically significant artifacts.”

Previously, the gallery included very little technology to tell the story of the Pacific War. “There were little or no standard systems in this project originally,” explained principal Jeff Bowen. “Each exhibit technology package was tailored to the needs of the story for that exhibit. In some or many areas there was no technology at all.”

With a wide array of exhibit types, the control systems as well as the AV as a whole had to be very flexible. “We had to first look at the exhibit in relationship to the museum as a whole and the purpose of each exhibit,” Norris explained. “Then, we had to choose the appropriate video display, depending upon the type of exhibit, as well as the audio system. By taking a look at the purpose of the exhibit and the exhibit type, we prioritized the impact the exhibit should have on the visitor. Once all of the hardware packages were created based on the needs of that exhibit, we had to find a control system that would receive and deliver the information we needed for each exhibit, while making it easy to maintain and use by the museum staff.”

Bowen Associates decided on Medialon’s Manager 5 because it gave the gallery the ability to trigger certain events in each exhibit with sensors, and it allowed the timelinebased exhibits to run simultaneously. “This control system was also chosen because it provides for real-time editing during show production,” said Bowen crewmember David Bennewies. “This was needed because there were several exhibit elements throughout the museum that required tight integration between lighting effects, soundtracks, and video.”

The new gallery features edgeblended systems that are running Watchout on projectiondesign’s F32 projectors. “We also installed one of the new 48-inch Global Imagination projection spheres with a beefy server on the front end,” Bowen explained. “The projector inside it is also an F32. It projects animations and video on a 360-degree by 320-degree sphere. The audience stands and walks around the entire globe behind a railing while the prelude to the war is described via music and narration.”

The LCD screens in each exhibit range in sizes from 8.4 inches to 103 inches, and feature an array of manufacturers, including Marshall, ProDisplay, Samsung, and Panasonic.

The video systems are bookended by audio systems chosen by Bowen for each exhibit. Using speakers from Tannoy, except for in some of the kiosks, the speakers were powered by QSC, Crown, and Stewart amplifiers, which were housed within two racks from Lowell Manufacturing. “We chose Lowell racks for this install because we have found them to be well-constructed, easily prepped for equipment installation, and competitively priced,” noted project manager Mark Trotter.

“We also installed quite a number of Dakota focused arrays and some sound domes around the facility,” Bowen noted. For the remainder of the smaller exhibits a different method was utilized. “The localized kiosks and computer interactives use a low-powered mono audio system with independent volume control due to the visitors’ close proximity to the exhibit,” Norris explained. “The idea was to present the audio information on a larger scale to immerse the visitor into that particular experience.”

To achieve such an immersive environment was challenging. “The museum wanted a very high-impact, high-emotion experience in the Pearl Harbor exhibit,” Norris said. “The centerpiece of this exhibit was a captured Japanese miniature submarine that was used during the attack on Pearl Harbor. We light the space with water effect lights to give the visitor the feeling of being underwater with the submarine. Then we utilize the wall space above the sub to project images of the infamous attack on December 7th, 1941. We also light the area with LED fixtures to simulate explosions and fire. One of the major challenges in this space was having an image of a torpedo shoot across the floor over the distance of 80 feet and explode in a ball of fire.”

Creating such an experience in a small space wasn’t a simple process for Bowen Associates, but the results proved successful. “This particular facility had an enormous amount of information that was presented to the visitor in a confined physical space,” Norris said. Despite this, Bowen Associates was able to install the hardware in the exhibit space and still maintain relative isolation between the displays so that visitors would not be distracted, he elaborated. “You can deliver a ton of information in the smallest of spaces or immerse the visitor in that area, as we did in the high-impact experiences, with a bit of advanced planning and the correct hardware.”