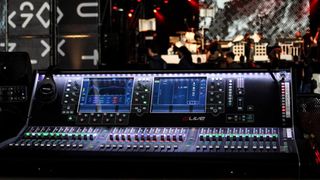 There is no shortage of solutions for live sound but some manufacturers have an edge. In this hands-on review, I focus on Allen & Heath, well known for world-class audio mixing systems. A front runner in its new suite of mixing solutions is the dLive S Class console series, created to handle heavy workloads in broadcast, touring, and permanent installs. If you’re in any of these markets, the dLive should be considered.

The dLive S Class comes in three models. The S7000 is the largest of the class and equipped with 36 faders and dual screens. The S5000 has 28 faders and a dual-screen console, and the S3000 has 20 faders and a single 12-inch screen. The control surfaces offer eight XLR/line inputs and eight XLR outputs. There are also two AES and three outputs, along with I/O ports for expansion cards.

Bottom line: if you’ve worked with Allen & Heath’s GLD series or iLive series, the dLive will present itself with a big-ease-of-use sticker. You will be familiar with the workflow of these consoles.

If you are unfamiliar with Allen & Heath digital consoles, you should find it easy to navigate in a few minutes. Both screens are pinch and zoom, much like our smartphones. You can also control your preamps, trim, equalizer, and compressor settings with the rotary knobs if you prefer an analog feel.

The routing is fairly simple. The I/O patch looks very much like Audinate's Dante Controller software. When patching you have to hold down the “patch” button that is displayed in the bottom left on the I/O page, then you can route your inputs and outputs as needed. If you remove this setting, you will no longer need to hold that patch button down, but I don’t suggest you do this. It is easy to patch things incorrectly. The patch button is a safety net when routing. Once you have patched a signal in, the console will ask if you are sure before routing your signal.

Customizing each bank is a welcome feature in any digital console. Strip assigning was a little more complicated on Allen & Heath’s iLive surface. With the dLive the process is simplified. It’s an easy drag-and-drop system. Grab the channel you want and drop it into whatever bank and layer you want. You can do this with any channel you’d like, so your control surface can be fully customized to create a mixing experience to your liking.

The dLive S Class Console in use with the Belgian electro rock band Soulwax.

The brain, otherwise known as the MixRack, is what makes this surface so powerful. The surfaces are built around the MixRack. The MixRack houses the XCVI processing core pioneered by the Allen & Heath team. MixRacks are housed with audio networking ports, audio i/o, and control. In most settings you will see these racks in works with a dLive surface. Not only can you pair the racks with the surfaces, you can operate them from an iPad or laptop simultaneously.

There are four different models of mix racks: the DM0, DM64, DM48, and DM32. The only difference between the models are analog I/O inputs. Each rack is still equipped with 128 channels of full processing, with expansion capability via DX expanders or digital sources. Together the paired surfaces and MixRacks can handle a heavy workload with full redundancy in any space. No matter the pairing of console or MixRack, one thing you won’t compromise on is the power behind the processing systems.

The ROI is in these systems’ versatility. Allen & Heath’s design team is constantly improving on the back end, such as its latest V1.6 firmware update, referred to as Fistral. The update includes a “multi surface” feature to connect up to four surfaces to one rack. Three multi-surface subfeatures are gain tracking, surface roles, and particle show recall. You can enable these features on all the surfaces connected, or you can assign certain roles to a surface.

Another Fistral feature is AMM (Auto Mic Mixing), which offers up two different mixing options, NOM (Number of Open Microphone) or D-Classic. We’re seeing this trickle into the mixing process with more digital consoles. It’s mostly used for speaking engagements, conference set ups, board meetings, etc. A new preamp and mighty compressor have been added to the lineup of DEEP processing architecture as well.

As the firmware updates continue, the consoles will become more versatile. For even greater flexibility, you can incorporate other protocols. You can use Dante, Waves Soundgrid, and superMADI expansion cards. The price point is one of the lowest on the market for a system this flexible, versatile, and powerful.

I’ve moved the S7000 and S5000 consoles around, and taken them in and out of road cases. You can easily load in and load out with two people. But it does take up a lot of real estate, as most consoles do. It’s not a drawback unless you need it compact when getting on a plane. The good news is that there are more compact options in the S Class and C Class surface lines, all of the way down to the fly-weight C1500. The models in the C Class are just as flexible, versatile and as powerful as the S Class.

All in all, both the dLive S Class and C Class provide a great sounding product. These digital consoles went from being the new kids on the block to becoming used in a wide range of big-name tours and permanent installs. Again, if you’re looking for a digital mixing technology that is constantly making improvements, take control of some dLive equipment and see what it can do.

Alesia Hendley (@thesmoothfactor) is an audiovisual operator at The Berry Center in Texas and the presenter of the AV/IT Weekly Update. She is also the co-host of @SocialSliceShow.