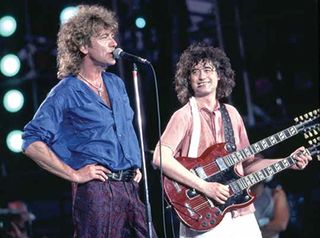 The Shure SM58 Made History Then... and Now

As microphones go, it’s the tool of choice for rock stars worldwide. As a first purchase, it signifies a rite of passage for garage musicians who predict rock stardom in their near futures. As audio gear goes, the Shure SM58 is an extremely democratizing piece of technology: it meets the needs of the most important VIP s, but it doesn’t require an A-list budget.

“People have grown up seeing their idols singing into this, and they can walk into a store and buy one for a hundred bucks,” said Chad Wiggins, category director for wired products at Shure Incorporated. “And it’s the thing.”

(Above) Led Zeppelin
(Right) Iggy Pop It was 1966 when Shure launched the SM58, originally with the broadcast market in mind. (The “SM” stands for Studio Microphone.) Acoustical engineer Ernie Seeler, who designed the SM58 for Shure, wanted to integrate the manufacturer’s original Unidyne cartridge technology that had been developed back in 1939, into a handheld form factor. However, instead of mounting the cartridge on a rubber donut to achieve mechanical vibration isolation, Seeler incorporated a shockmount design into the acoustical network of the cartridge itself, preventing the diaphragm, and subsequently the coil, from vibrating and thus creating an output. Wiggins pointed out that not only does this eliminate handling noise, but it also dramatically improves low-frequency cardioid response, and “it stays cardioid across a wider bandwidth, and has a better polar pattern as a result.” Plus, he added, the SM58 just sounds good. “It gives good reproduction and articulation and vocal response.”

While the SM58 may have been intended for the broadcast market initially, it makes sense that the live sound market adopted it when one considers not only its design attributes, but also what was happening culturally in the mid-to-late 1960s. The explosion of rock ‘n’ roll in America and the subsequent British Invasion drove the need for high-performance audio, and the SM58 has been in the hands of some of music history’s highest performers— everyone from Led Zeppelin, Ozzie Osbourne, KISS, Alice Cooper, and Nirvana to Iggy Pop, Martina McBride, The Who, and The Rolling Stones. “When it came out, it was really the first thing that hit on a number of attributes: it sounded good, it resisted feedback, it was fairly affordable, really durable, and it was ergonomically comfortable because it was in this handheld form factor,” Wiggins said. Hence its appearance at many of contemporary culture’s history-making events.

Wiggins also noted that the SM58’s prevalence has lent it to being a no-brainer when it comes to input sources. “Because it’s been adopted by a lot of people, I

think it’s also been a standard, consistent input source to every mic preamp design over the past few decades, too,” he said. “If I’m designing a mic preamp or an EQ, I’m probably testing it with an SM58—it’s probably something that figures into the equation of many designs. So it works at the system level just by virtue of its inertia over time, too.”

While the SM58 boasts a relatively simple design with few parts, it has inevitably evolved over the decades as materials and manufacturing techniques have improved. “Nearly every part of the SM58 has changed over its history,” Wiggins explained. “It might be a new process that we’re bringing into our manufacturing facility, and we find a way to do something better. Or maybe we’ve taken what used to be done by two parts and reduced it down to one part.” He noted that this enables Shure to control costs, “and it also minimizes the effect of tolerances that

Clockwise: The Who, Patti Smith, Christina Perri might stack up on

individual parts and create variations and variability in the final acoustic response.” The more efficient the process can be, he said, the more reliable the product. “But it also controls costs in such a manner that we’re able to put the product in the market at the same price that it’s been at for as long as anybody can remember.” If one were to correct for inflation and not take advances in manufacturing into account, this wouldn’t be the case.

The relationship between the product itself, and the manufacturing techniques behind its creation, is symbiotic. “The testing, the manufacturing and the design are always continuously pushing each other to improve,” Wiggins said. “We may find a new way to test something that reveals a limitation in the design that we weren’t aware of before.” Conversely, the design may actually push the limits of the testing capabilities.

For the engineers at Shure, the goal is to continuously explore this push-pull dynamic to deliver what performers at all levels have come to expect: a reliable product that sounds good, doesn’t break the bank, and puts up with the abuse the live sound environment inflicts on it. “The SM58, in many ways, is shorthand for the Shure brand. It’s ingrained in the culture,” Wiggins said. “We make a lot of these, and we strive to make them consistently.”