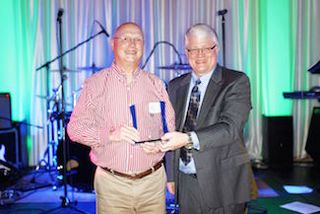 Comprehensive Technical Group has awarded Cliff Scott, area manager of market development, as its 2015 Sales Representative of the Year.

“This award was based on points awarded in multiple categories, with an emphasis on sales gains. Cliff scored higher than the other CTG sales team members, in spite of Cliff working in an established, mature territory,” said Lee. “Cliff’s success was built on established, long-term relationships. He drew on all of CTG’s resources to provide quality, customized solutions for his customers that were well within their available budgets. In addition, Cliff grew his sales by 225 percent, while meeting his assigned profitability goals. His efforts added significant value to his customers’ overall buying experience. We are very privileged to have Cliff on the CTG team and all of us here at CTG look forward to a great 2016!”

Scott began working at CTG in 2011. Prior to joining CTG, Scott was the owner and president of Crescent Communications Corporation for over 22 years in New Orleans, Louisiana. Scott has a sales background and began his career in the food wholesale industry. His career in technical sales in the AV industry began when he migrated over to the professional and broadcast Sales arena, over 30 years ago.

When asked what the key to his success is, Scott said “It starts with colleague support that includes our Louisiana Office Manager Cynthia Grinnell, an experienced professional for over 25 years. The leadership in Atlanta is the best and Josh Shibler, our systems architect, was truly invaluable for some of my project wins for 2015. CTG has a second to none engineering and installation team.”

Upon winning the award, Scott thanked CTG, saying, “I am both pleased and humbled to have won this award. I was competing with some very good and extremely seasoned professionals in the video systems arena.”