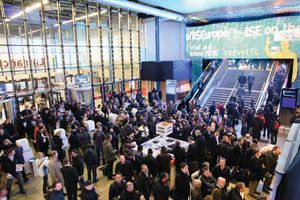 ISE has seen huge increases in exhibitors from the unified communications and home automation marketplaces, as well as another big surge in pro-audio companies, a reflection of the convergence of AV integration and entertainment technology.

Question: What features its first keynote address, a variety of new conference events, and more show floor space than ever before?

“Our show floor will be the largest ever, with an additional hall taken at our Amsterdam RAI venue, and the amount of occupied net square meters exceeding 30,000 for the first time,” said Mike Blackman, ISE managing director.

As an addition to its pre-show program, ISE 2012 will host its first Dynamic Events conference. Aimed at technology designers and producers of largescale events, the conference is timed in the run-up to the much-anticipated London 2012 Olympics and Paralympics. Organized by Mondiale Publishing in association with the company’s international magazines TPi and mondo*dr, Dynamic Events is a new conference dedicated to the use of lighting, sound, video, and staging technologies in large-scale entertainment and sporting environments.

In addition to Dynamic Events, ISE will feature its second InfoComm Future Trends Summit and the fourth edition of DiSCO, the Digital Signage Conference. At the conclusion of these Conferences, all delegates and other ISE attendees are invited to the Keynote Address, “Blueprint for Business Growth in the Digital Age”, to be delivered by Gerhard Schulz of Ingram Micro.

The lessons learned by Ingram Micro, Schulz will argue, have an irresistible resonance for the audiovisual industry as it confronts a networked future. “The convergence between AV and IT is not an event on our horizon, but a contemporary reality that will be in evidence on almost every exhibitor stand at ISE 2012,” Blackman noted. “We searched long and hard to find the right voice to articulate the threats and opportunities posed by this convergence, and believe we have found the perfect partner in Gerhard Schulz. Because the Ingram Micro experience exactly mirrors the evolution being felt by so many AV and IT companies today, the move from front-office, volume product reselling to the provision of complete solutions that bring more and more technologies into the mix.”

ISE’s 2012 show floor will be the largest ever, with an additional hall taken at the Amsterdam RAI venue.

Yet another new ISE hallmark will be an Opening Reception jointly hosted by InfoComm International and CEDIA. During show hours, CEDIA and InfoComm will join forces to host a combined Education Zone, with a central information point and all sessions located in the same building, creating a purpose-designed destination for classes within ISE for the first time.

What makes ISE unique is the way it combines the best of commercial and residential systems integration, Blackman noted. “In Europe, there are many integration companies who are active in both markets, and this creates a great diversity of technology and business trends on the show floor, as developments in these two markets influence one another. Europe leads the world in the creative application of digital signage, and it’s interesting that even though the advertising industry generally has still not recovered to pre-recession levels of activity, we will be hosting more digital signage companies than ever in 2012.”

The fact that the ISE show floor has grown by about 17 percent compared to ISE 2011 is a great advertisement for the resilience and robustness of the industry. “In the face of some worrying financial and economic developments, our market continues to grow, and our pre-registration numbers are also looking extremely promising,” he said.

The Eurozone is the largest economy in the world, Blackman said, so even if it shows low growth or enters recession in 2012, it is still a market of enormous potential for the industry. “It’s important to remember, too, that there is much more to ISE than the Eurozone. Indeed, our strongest growth in attendance in 2011 came from countries on the European periphery, Scandinavia, Eastern Europe, the Russian Federation and CIS, Turkey, the Middle East, and even India. ISE will always have a distinctly European flavor, but it is now a global forum for systems integration business.”