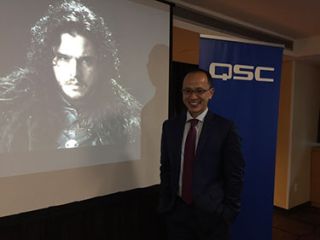 With countless AV-enabled conference rooms glowing across a skyscraper backdrop, QSC brought its vision of the AV future to a room full of consultants gathered on the penthouse level of a midtown hotel in New York City on October 12. And just like the cooling temperatures outside would indicate, the session’s theme was “Winter is Coming.” Except that message, scrawled in a Game of Thrones font across the slides of president and CEO Joe Pham’s presentation, was amended so the “I” and the “T” were capitalized, and “coming” was replaced with an emphatic “here.”

Yep, IT is here. And it has triggered a transformation nearly as dramatic as the plot playing out in multiple seasons of Game of Thrones, which Pham used as a wittily appropriate analogy for the current state of the AV industry. Right now, there are good guys and bad guys, and other uncategorized guys, all of whom want to be king, he described. But meanwhile, there is a much larger and more ominous threat to all these characters’ way of life, and only Jon Snow sees what’s really happening.

What that means for us is, “Winter has brought transformation from product to platform,” Pham said. “This is a transformational change in our industry. What are you going to do to be Jon Snow in your business?”

AV is adopting the IT mindset, prizing network centricity, standards, and scalability. Beyond that, we’re all living in an iPhone world where the hardware has been commoditized and the apps—or services—are what we invest and rely on.

QSC has made its own Jon Snow moves, evolving from its origins as an amplifier company to an audio systems company with the addition of loudspeakers and networking technology, to its present status as providers of an “audio video control platform,” as Pham described it. Software-based and built from the ground up on IT technologies, QSC’s audio video control offering can run on a standard off-the-shelf server like the Q-SYS Dell Server Core it released earlier this year.

“Some of your clients just want to buy like this,” Pham said. “The idea that they’d have to buy dedicated hardware just to run videoconferencing is ridiculous to them…. You have to have a platform connecting to all other platforms in the ecosystem.”

The flexibility inherent to this technology model will also bring another IT tendency to AV, Pham predicted. “The traditional ownership model will be more flexible,” we’ll be talking about AV as a service. And along with that, the rigid constraints of hardware that has to be categorized as a capital expenditure will be transitioned to an operational expense, which clients prefer.

The dramatic arc of his talk complete, Pham had a positive message for the room full of Jon Snows. Just like the final season of Game of Thrones, which is picking up where the books of George R. R. Martin left off, “We are writing our own story now.”