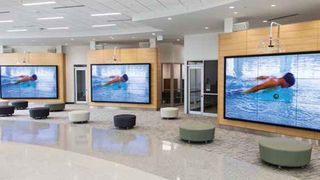 Oftentimes, the best way to motivate oneself to achieve a goal is through visualization—imagining the prize, and keeping your eye on it. So when Thibodaux, LA, decided to promote physical activity and healthy lifestyles by opening a new, state-of-the-art Wellness Center, it opted for three 12-foot-wide video walls in the lobby to help amplify its vision of an active community.

“If you’ve been down to Louisiana, it’s not the best place in the world for healthy eating,” said Tony Shannon, president of VisionQuest, the audiovisual integrator and content provider for the project. “They’re interested in trying to promote better health in the community, and not just catching things after they’ve become a problem, but being more proactive.”

To accomplish this, Thibodaux Regional Medical Center in 2013 began work on a Wellness Center with fitness, education, and rehabilitation, as well as clinical integration with advanced diagnostic tools, health and wellness doctors, neurosurgeons, neurologists, pain doctors, endocrinologists, and more.

With an estimate of 120,000 people entering the facility per year, Greg Stock, CEO of Thibodaux Regional Medical Center, decided that the entryway needed something special to energize and motivate residents. “They wanted something that would grab your attention, pull people in, and get them interested in trying to have better health,” Shannon said.

The VisionQuest team devised a solution of three 3x3 video walls made up of Planar Clarity Matrix MultiTouch LCD displays, with visuals running through Renewed Vision software from three Mac Pro computers. The walls display 4K videos and images shot and produced by VisionQuest, specifically for this project. “The images that run across the wall are things of the region,” Shannon said. “We went down there and took film crews, and we created all the content that goes on the wall.” In addition to imagery of sports and activities like running and swimming, the walls show flyover videos of local geography such as bayous and plantations, which VisionQuest used drones to capture.

The walls do far more than just captivate, though; they’re also informative resources. “On each display there’s an icon in the center that says ‘touch here to begin,’ and when you touch that, it becomes interactive,” Shannon said. “So you can learn about diabetes, or obesity—anything you might have a question about but aren’t ready to talk to a person about yet.” Augmenting the visual aspect of the touch-interactive displays are Brown Innovations Sound Domes, which hang above the walls and provide audio directly to the user below, without disturbing others in the space.

Additionally, the lobby features Renkus-Heinz speakers driven by Lab.gruppen amplification for events, “so you can plug into this thing and have a presentation with a laptop computer, or they can have a videogame tournament there, or they can watch the football game,” Shannon said. “And it’s all switched through Savant.”

Integrator VisionQuest created all the content for the displays, including interactive, informative touch programs and video of local geography shot with drones.

VisionQuest also designed and installed AV systems in two other rooms within the Wellness Center: a conference room, and a 50-plusseat theater with Digital Projection projector, Tannoy speakers, and a Da-Lite screen.

Overall, the construction of the Wellness Center took some three years to complete, and opened last fall. “The construction of the facility ran a bit long—they ran into some issues down there,” Shannon said. “And we couldn’t go in with this type of technology until the very end of a project, when it’s clean.” Instead of treating this as a problem, VisionQuest used the longer timeframe as an opportunity to spend more time on the content side—both shooting footage and perfecting the interactive aspects of the displays.

But the extra work has met with results that exceeded expectations for the Wellness Center, with membership almost doubling what management had anticipated. “Feedback has been very positive, very high,” Shannon said. “That people would spend time to go over and look at these things, and learn about the facility, learn what the rooms are, who the doctors are, what people can do there, learn about their health—that’s an important part. And I was very impressed by how Thibodaux Wellness Center and Thibodaux Medical Center are so involved in their community, doing a phenomenal job there reaching out to people.”