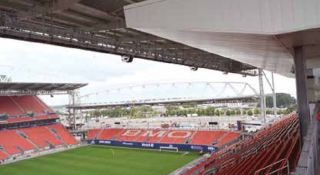 BMO Field in Toronto—Canada’s first purpose-built, soccer-specific stadium—has been providing hundreds of thousands of soccer fans with live action since opening in 2007. Currently home to the country’s national soccer team, the Toronto FC professional club, and most recently, the Argonauts of the Canadian Football League, the venue recently underwent an expansion, as well as several upgrades that include a new sound reinforcement system implemented by Toronto-based Westbury National under a fast track subcontract with PCL Constructors Canada Inc.

“We knew from the beginning that the installation of the canopy would necessitate a new sound reinforcement system,” said Andrew Foord, director of design and engineering at Westbury National. “Our job during phase one was to build and equip a new audio control room, and we also upgraded to two QSC Core 1100 engines—set up as a redundant pair—to facilitate implementing a Q-SYS integrated DSP, control, and amplification platform that would serve as the backbone of the new system.”

Before the canopy could be erected, two primary lighting poles, which were also key as mounting positions for the existing point-source sound system, were removed. “We’d installed the previous system several years ago, and while it was still in terrific shape, a point-source approach was no longer feasible with the new configuration,” Foord explained. “It was clear that a distributed venue-wide approach with loudspeakers flown from the canopy structure and catwalks would deliver optimum full-range coverage to every seat.”

“They proved to be a perfect fit,” Foord said. “The boxes have excellent fidelity and offered plenty of design flexibility. The fact that they require less power was a nice bonus and ended up saving our customer unnecessary amplifier expense.”

The design incorporates 18 clusters of AH loudspeakers, with Fulcrum’s Rich Frembes stepping up to provide support regarding placement and coverage issues. “We had a very small time window for the actual installation,” Foord added. “Rich was quite helpful in confirming that the system—at least on paper—was going to do what was needed. He also made sure we had all of the boxes on time and ready to go.”

Specifically, the system incorporates six individual hangs of one AH96 (90- by 60-degree dispersion) loudspeaker covering the south side stands; six hangs of two AH96 loudspeakers covering the west side; and six hangs of one AH96 and two AH65 (60- by 45-degree dispersion) loudspeakers for the largest seating area on the east side. Audio power is delivered by QSC CXD amplifiers located in four climate-controlled racks in the east and west catwalks.

“Integrated DSP and amplification was a primary goal on this project,” Foord said. “The CXD amps provide a dense number of channels and plenty of power for the rack space they occupy. And with Q-SYS, we were able to supply extensive networking distribution that’s fully redundant—great for sound reinforcement and also critical for life-safety paging capabilities.”

With limited access to the workspace while the canopy was being installed, Foord and Doug Wildeboer, senior project manager at Westbury National, devoted considerable front-end time to planning the logistics of the installation, critical given the tight timeframe. Custom loudspeaker cluster brackets were designed and fabricated to allow pre-assembly, also prewired with multi-pin connectors prior to arriving at the job site. In addition, every cluster was thoroughly tested at the shop.

The planning process also addressed how to most efficiently install clusters weighing up to 600 pounds at heights sometimes reaching 80 feet above the raked seating, with construction logistics ruling out driving in a scissor lift. “Ultimately we devised a rolling scaffold structure that allowed us to roll each cluster to where it needed to be flown and attached,” Wildeboar said. “The scaffold not only saved a lot of time, but also a lot of physical labor. As a result, we only needed a moderate-sized crew, which also helped keep the cost down.”

The meticulous planning paid off significantly, with the entire system in place within 14 days to leave plenty of time for tuning before the first game. “Another key was 3D modeling done by our engineering department,” Foord added. “We were able to look at the system from a dozen different directions and see issues, problems, and challenges that were addressed ahead of time.”

The new system was tuned in the midst of the chaos of getting the revamped venue ready for game day. “When we did the client walk-through, it was clearly a success,” he concluded. “One of the things the owners noted was the linear coverage throughout the stadium. And to Fulcrum’s credit, it is indeed outstanding. Walking the venue, you literally can’t tell the difference when you pass from the coverage zone of one cluster to another.”