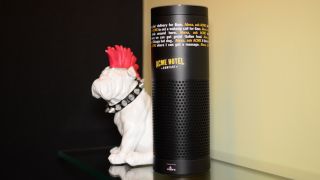 Amazon Echo, powered by Volara, controls multiple in-room functions at Chicago’s Acme Hotel. Seeking to outsmart a smart speaker? You’re right on time. They’ve gotten powerful enough to solve a lot of problems for AV integrators and their clients—and just mature enough to start being easier to customize and control.

Right now, smart speakers are enjoying maximum visibility as devices for the home, playing music for people via their smartphone or the cloud, dialing up recipes, and turning IoT (Internet of Things) devices on and off. The Alexa-enabled Amazon Echo, Google Home, newly launched Harman Kardon Invoke with Cortana digital assistant, and the upcoming Apple HomePod are just some of the proliferating players. 55-percent U.S. household market penetration is predicted by the year 2022.

AV is hot on the tail of this consumer electronics trend, with smart speakers’ potential for everything from huddle rooms to hotel suites emerging quickly. “A ‘Smart Speaker’ is a Wi-Fi connected speaker and microphone with an associated natural language processor that translates speech to code—resulting in capabilities akin to those you might expect from an assistant,” explains Dave Berger, CEO of Volara, a provider of custom voice-based solutions to the hospitality industry. “With enterprise-level integrations, particularly in the hotel environment, it becomes a very powerful business tool.”

Kevin Hague, VP of technology strategy for Harman, classifies them as a traditional-looking speakers that also have an intelligent layer inside. “An intelligent layer is usually defined by the virtual personal assistant or VPA,” he said. “We look for connectivity between the speaker and a VPA: Now the speaker becomes something you can talk to—it's intelligent, and it can answer questions or control IoT devices such as lights, shades, or projectors.”

The benefit of smart speakers is their ability to provide super-intuitive control over complex systems. “People have to be trained to use a computer,” noted Hague, “whereas a voice speaker can just be spoken to and it understands what you're saying. A lot of that breakthrough comes from new machine-learning technologies that allow the computer to understand naturally what we're asking. I can say, ‘Turn on the lights, turn off the lights,’ but that's basic; computers have been able to do that for quite some time. I now can say, ‘Turn on the lights throughout the house,’ or ‘Turn on the lights in a certain room,’—something more specific.

“In hotels in Asia, for example, there's now a lot of these highly automated rooms that have many different lighting configurations and buttons throughout the room. Now, imagine you could just go in and talk to the room in whatever language that you speak, and they would turn on and off the lights any way you want, or change the TV channels, or select English channels only. Things like that become possible with voice interfaces.”

Kevin Hague, VP of technology strategy, Harman Calling voice control “frictionless” in comparison with keypads and touchscreens, Berger sees the rapidly evolving smart speaker as transformational technology that is connecting AV directly with today’s giants of industry. “Volara has been collaborating with Amazon on a highly technical level for about a year,” he said. “We were the first company to deploy the Alexa platform at scale in the enterprise and we shared our learnings with Amazon as we progressed, so that together we could improve the experience for both hotel guests and staff. Our first full hotel, the Acme Hotel in Chicago, was deployed in December 2016. Today, our software is running in every hotel that is leveraging voice technology at scale. It’s early but the implications are limitless.”

For Bill Lally, president of the hospitality integration firm Mode:Green, the ability for smart speakers to scale quickly in AV scenarios is a source of excitement. “These devices are becoming a connecting point,” he said. “Our interest in smart speakers is not as much in the functionality of the device talking to one particular system, but of the device talking to 10 different systems while appearing seamless to the end user. Users are just having a conversation and it's not scary, even for people who are less comfortable interacting with computers and screens. You can walk into a boardroom, for example, and say, ‘Turn the projector on,’ and you don't have to do anything.”

It’s not surprising that hotels have been identified as hotspots by entrepreneurs like Berger and Lally, whose firms recently partnered to bring custom voice control to these establishments with super-high turnover among their users, a.k.a. guests. “One of the biggest challenges in hospitality is that we don't have the ability for training like we would in a corporate environment,” Lally pointed out. “In the boardroom, we work with the team for a couple of weeks to teach them how everything works. On the hospitality side, we have to be quick, very streamlined, and simplistic in how we design systems.”

There are privacy concerns with devices that can listen to everything, however—an important issue that the industrial adopters must assuage. Choosing to install an Echo in your own home is one thing; checking into the Honeymoon Suite where Alexa awaits is another.

“Volara has developed solutions that are privacy-compliant,” said Volara’s Dave Berger. “We never receive or manage recordings, transcripts, or personally identifiable information. We also have established measures to disassociate the guest’s voice from their location, so the natural language-processing platforms alone cannot identify the source of the recording. And Volara is platform- and device-agnostic, so if any provider oversteps, it’s a seamless switch to another provider.”

Bill Lally, president, Mode:Green As commercial-grade applications expand, Harman’s Kevin Hague sees an opportunity for AV integrators to expand their clients’ horizons. “If I were an installer, I would sell the promise that voice control will enable employees to walk into a conference room and simply say, ‘Start my conference.’ Then it turns on the TV, switches to HDMI, draws the shades, turns on the projector, and you're off to the races.

“On the wild side are additional capabilities: the room can read the scheduling database and know what's been assigned to it,” Hague said. “Then it could automatically dial the phone number, start the videoconference, select the last known input that that user uses with their laptop, whether that's HDMI or VGA, and the person doesn't have to think about starting the conference. That alone would save United States companies hundreds of millions of dollars a year, if not billions.”

For AV professionals ready to dive in, the first stage of training is to become a smart speaker user. “I think the easiest way for somebody to get started is to buy one, and take it home, hook up some IoT devices like Samsung’s SmartThings hub, and learn how they work,” Hague said. “Then, once they understand how it's used, they should go to the developer website of the VPA. The ones that I would expect we're going to see in use in buildings, corporations, and enterprise are going to be specifically IBM Watson and Microsoft Cortana for larger companies, and then probably Alexa, Cortana, or Google for smaller companies.”

“Cortana could be an interesting play for most installers because they do have the ability to write ‘skills’ and do deep integrations if they want. Writing VPA skills is a language you have to learn—more complicated than configuring a touchscreen, but probably not as hard as building an app on a phone.”

For those who drink in disruption, smart speakers are set to pour it on in a way that AV pros like Mode:Green’s Billy Lally welcome with open arms. “Voice control is a new way to look at a project and come up with new solutions,” he said. “It’s giving us access to all these other interfaces and devices that we didn't have access to before. It's kind of a new world.”