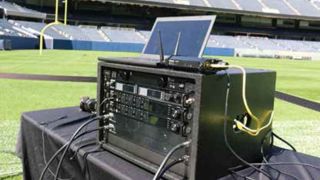 Usually, talk of “scale” in AV is all about fulfilling more demands with greater efficiency, and repeating that result with regularity across a great number of endpoints. But in addition to that, there has always been talk of actual scale—as in size—and getting big jobs done with less gear.

With those two aspects of scale in mind, cut to an image of a crisp fall day on the turf at Soldier Field in Chicago. A crowd of listeners stands just outside the south end zone, facing a pair of pole-mounted speakers. Between those speakers is a single microphone receiver and a laptop showing a whole lot of spectral interference from a cityscape crowned by the gargantuan, broadcast-beaming Willis (née Sears) Tower in the not-too-distant background.

The speakers are silent. Then there is a dramatic pause as the crowd lifts its collective gaze skyward, scanning the empty upper decks to see a tiny figure moving among the seats in section 447. Squinting, a viewer can see the speck waving his hand. Then, with stunning lucidity, the voice of that distant person is heard as if he were standing right before the crowd. But no—indeed, the wind buffeting and his hand-waving gestures indicate that he is indeed speaking from the nosebleeds.

Michael Johns waving up at John Born in the stands.

It was a bit of technological wonder on a scale that not commonly seen, and so there was excited murmuring among the crowd on the field. It was actually a gathering of press people, so they quickly stopped murmuring and wrote things down in notebooks. And what they were noting was that the Shure Axient Digital receiver in front of them was very easily picking up and delivering the voice of our faraway speck, who happened to be John Born, product manager for wired products at Shure. Speaking in dialogue with his turf-planted colleague, Michael Johns, product manager for Axient Digital, Born was helping to prove that the new handheld ADX microphone he was using could easily transmit at 10mW across some 219 yards in a very crowded RF environment. And, what’s more, the signal was flying toward two antennas in true digital diversity setup.

The elaborate feat was staged to mark the debut of enhancements to the Axient Digital lineup, including the ADX handheld and the adjacent AD Series of transmitters, which can be used interchangeably with Axient Digital receivers and battery charging hardware. Also new to the lineup is the sleek ADX1M micro body-pack that boasts some pretty serious water resistance (ask Shure about its synthetic perspiration-spraying “SweatBot” R&D tester sometime), the ADX1 bodypack for standard use, and the AD610 Diversity wireless access point for ShowLink.

Improvements to the premium Axient Digital offering were made as a result of evolving customer needs, according to Johns. Facing a shrinking wireless spectrum that is growing ever more crowded as pieces of it are reallocated for telecom use, users needed a boost in RF stability and spectral efficiency.

With the newly designed digital radio, which brings added stability to a shaky RF world, come other features pertaining to scalability, Johns asserted. First, there’s the fact that Axient Digital hardware can be easily integrated into existing Axient installations. Next, there’s the networked charging capabilities that will reduce headaches on big installs. “If we have a situation where there are 200 channels of Axient Digital out in the field—which is no exaggeration, that will certainly happen, and has already—the ability to network all the chargers and look at them from one central location saves time. So instead of having to go out in a golf cart to every building and check my batteries each day, I could just go into Wireless Workbench and see which batteries have been charged and which haven’t. And it’s a workflow optimization; it saves time.”

Additionally, on the hardware and scalability tip, Johns added, “I should also mention the receivers and transmitters are all extremely wide tuning,” which makes it easier to find open channels in any given environment. “It’s like casting a wider net when fishing.”

Close-up of the receiver.

As if the distance weren’t enough, another demo was staged to illustrate the robustness of Shure’s patented Quadversity offering. In this scenario, the Axient Digital receiver uses built-in smarts to monitor and combine the signal from four antennas, increasing gain and signal stability across a single zone, or extend the range into multiple zones.

At this point, having returned from his faraway perch in section 447, Born put on the AD1 bodypack and walked deep into the concrete tunnels of the stadium, talking all the while, with the sound of his voice traveling clearly to the on-field mini PA setup, aided by the Quadversity system’s extra pair of antennas positioned just inside the bowl entrance.

Then this big demo for a tiny body pack continued with another challenge. Selecting one of the noisiest frequencies available at that moment, Johns tuned the ADX1M to transmit directly on top of it. There was a bit of suspense, as Johns hadn’t had time to test this before the live demo. But to the relief of those on the field and those who will be using the scalable, tiny new gear on big jobs out in the field, it worked just fine.

Kirsten Nelson is a freelance content producer who translates the expertise and passion of technologists into the vernacular of an audience curious about their creations. She can be reached on Twitter @kirstennelson