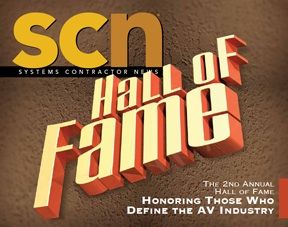 Honoring Those Who Define the AV Industry

A young, bespectacled boy with a familiar white shirt and perpetually airborne tie enters a doctor’s office in an episode of the animated Dilbert show. His mother voices concern that he’s been taking things apart at home, reassembling them into—dramatic chord—a ham radio set. At first the physician says this behavior is normal, but when young Dilbert fixes a broken EEG machine in the office without instruction, the condition is determined to be “Worse than I feared.”

Dilbert, the doctor intones, “has The Knack. It’s a rare condition characterized by an extreme intuition of all things mechanical and electrical, and utter social ineptitude.”

Asked if he’ll lead a normal life, the doctor responds with an air of barely restrained desperation, “No. He’ll be an engineer.”

Punchlines aside, the first question in SCN’s monthly “The Way They See It” Q&A asks the subject to pinpoint the moment they knew they were destined for a career in electronics. On occasion, it is actually posited it as “When did you realize your affliction with AV?”

The answers tend to feature one of two prominent stories that are told and retold. There are the musicians who realized their bandmates would rather have them fixing amps. And there are the video experts who were constantly called out of high school classes to help teachers get their presentations back on track. There are many more variations on this theme, especially as the “digital native” generation joins our ranks, but the common denominator is: “I’ve always been interested in the technical side of how to make things work.”

The condition is fairly easy to diagnose, and when identified and fostered early, can eventually lead to a fulfilling life of solving problems with new gadgets. The pages of SCN are filled with these success stories, and this month we honor a select few with induction into our Hall of Fame. These esteemed members of our industry have demonstrated The Knack, and continue to do so with their work and volunteer efforts.

This year we also begin the tradition of inducting a Groundbreaking Installation into the Hall of Fame. Milestone projects are the result of our industry’s greatest technical and personal efforts, and therefore we salute both the people and the installation.

Please join us in honoring those who help to make our industry a great one. Through their leadership and example, we can see how those things that are broken can be fixed with The Knack.