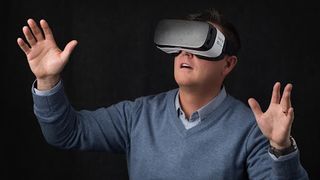 “I decided that my passion in life was going to be teaching,” mused Jeff Day. Which is why he originally studied communications, Italian, art history, and literature in college. After a brief stint teaching these subjects during his time at Brigham Young University, Day decided the business world was a better fit for him. He continued his passion for passing on knowledge in the office, working to set a new direction for the industry and his current company, Bluewater Technologies.

Day began his technology career translating from English to Italian for the now-defunct WordPerfect. While the job wasn’t his favorite, he discovered he enjoyed working with technology and “was hooked.” After moving through a variety of roles in different companies, Day landed at Cisco in 2006, where he was responsible for more than 150 large enterprise customers and greater than $300 million in sales. “I was part of an early group of people at Cisco that took the telepresence solution out into the world, and that’s really when I would say I got into AV,” Day said. “I would have never thought I would have ended up there. I ended up there by my understanding of collaboration, and technical chops. More importantly, I could help people really understand the value in those capabilities.”

While at Cisco and launching the company’s telepresence and collaboration products, Day reached out to a Bluewater Technologies employee in attempt to recruit him for Cisco. His attempt was unsuccessful—the employee loved working for Bluewater, and raved about the company, something Day always kept in the back of his mind.

A few years later, Bluewater was looking to revitalize the company and the way it did business. Day was intrigued, and, in the fall of 2014, after a few months with the company, became CEO. A big reason for the change was his belief in creating an experience, and bringing the audiovisual into the bigger picture. “I thought to myself, this is exactly what I’ve been feeling is going to happen,” said Day. “There would be experience creators, and they would have deep technical roots but they would be even better storytellers.”

It took a bit of time, but Day was able to transform the company “on the notion of experience.” Working with others, he morphed the Bluewater’s mission statement from “being a great AV integrator in the Midwest that also does live events” to “to empower leadership with capabilities that amplify stories that create lasting value.”

Day’s commitment to the story is what led him to join AVIXA’s board of directors in early 2016. Prior to his election, he was motivated by the association’s commitment to the exceptional experience, but made it clear that he was only interested in volunteering if he could help “move the needle.” He wound up doing far more than that: Day, along with other board members, was instrumental in the association’s rebranding from InfoComm to AVIXA. “Since my coming into AVIXA, I’ve seen that it’s a very vibrant organization with lots of capabilities, resources, and services—particularly in the charitable foundation side with the education and the awareness,” Day said. “I’ve been getting very involved in my local community with connecting the resources of AVIXA with students, and prospective people for our industry. I think it’s be fair to say I’m an ‘AVIX-er’ for life.”