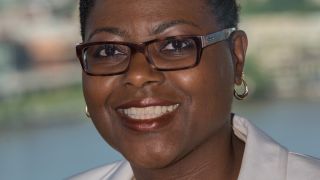 Each one, teach one. That’s the motto Alexis La Broi, CTS, CMP, lives by and it’s served her well in life—especially in her pro AV career.

Like many of us, La Broi didn’t know she could “have a career as an audiovisual person”; she focused on technical theater during her college years at Northwestern University, and was assigned a work-study position with Sound and Sight, the school’s audiovisual department at the Student Union Center. Working there for three years, she discovered her love for the industry.

“When I graduated and didn’t get what I really wanted at a theater in Chicago, I thought about audiovisual,” said La Broi. “I looked for positions and that’s how it started off, as a hotel AV technician.”

Working for PSAV at the Renaissance in Chicago, La Broi doubled down on her AV career, climbing the ladder from technician to assistant director, to director. In 1998, La Broi moved to Washington, DC to take a director position at the Hyatt Fair Lakes. Still residing in DC, La Broi moved through various positions with companies like Media Vision and AVI-SPL. She is currently a systems consultant at Avitecture, where she aims to deliver systems that enable clients to communicate, share information, lower energy costs, and improve organizational productivity.

With decades of hotel experience, it should come as no surprise that La Broi is well known for her work with meeting planners; in fact, she’s even a member of her local chapter of Meeting Professionals International (MPI), something you don’t hear much in the AV industry. So, why does she do it?

“You go to an event, a meeting, a conference, and everybody is facing the same direction. The point of the gathering is to communicate an idea to everybody in that room and that makes audiovisual one of the most important parts of a conference. Just like in integration, audiovisual is sometimes thought about last. It should be right up there in the very beginning of the planning, and I talked to meeting planners about that,” said La Broi. “I remind them that it’s a very important piece, and if the audio doesn’t work, or the video doesn’t work, everybody’s going to remember that.”

But how does she get busy event professionals to stop and listen to her? “It’s like any other type of industry: you have to build trust with people. When you work with a planner, you have to build that trust so that they will be open to what you have to say about technology and communicating ideas to their stakeholders.”

And building trust is something La Broi does easily. Her thoughtful, welcoming nature has been a guiding light for many in the industry. She’s quietly and confidently attracting a new type of #AVTweep into the fold. Pro AV has been openly struggling with finding diverse voices and La Broi is definitely doing her part to ensure everything we touch includes a wide range of opinions.

“AV nerds—and I definitely consider myself one—are sometimes introverted people, they’re not super outgoing,” said La Broi. “They’re more likely to stay back and be on the sidelines. But you can jump in and be a voice for other people just like you.”

Being a voice for others is part of her larger personal goal of bringing more women and people of color into the industry, and getting them in influential positions, such as AVIXA’s leadership search committee (LSC) or board of directors (BOD); she is currently serving year two of a three-year term on the LSC.

La Broi proudly stated that she’s been overjoyed watching these goals come to fruition. “Thirty years is a long time, and that’s exactly how long it’s been since we [AVIXA] have had a person of color on the board. I’m excited to see Wallace Johnson join AVIXA’s BOD, in addition to having people of color and women on the LSC and other councils; I’m really happy about this and will continue to work on diversity in our industry.”

La Broi is careful to note she hasn’t done all of this on her own. She’s a firm believer in the mentoring process. One of her mentors, Victor Escobedo, taught her a lot about being a leader and “knowing your stuff,” she said. “When you know your stuff, you can command a higher salary, and a lot of respect in the industry.”

And being a mentor doesn’t mean a formal, scheduled sit-down with your elder, according to La Broi. It’s important to recognize that mentors can be younger than you, and in completely different industries. “Everybody has experiences, and if you’re willing to listen to what their experiences have been, then you might be able to figure out what your next move is going to be, what path you want to go on, by listening to how they’ve dealt with some challenge or adversity,” she stated.

With her positive attitude toward gaining and being a mentor, La Broi’s face lights up when you ask her about Camp La Broi, her annual summer visits with her nieces and nephews. La Broi’s family is scattered throughout the Midwest, which is why she invites her nieces and nephews (sometimes up to six at a time!) to come spend a few weeks each summer in her and her husband’s DC-area home.

She claims she does it for selfish reasons—she just wants to see them and wants them to know their Auntie Alexis— but, of course, there’s more to the story. During the day, the kids go to summer camp with local DC kids; on nights and weekends, they explore the area and draw on new involvements. “My whole thing is meeting new people and creating new opportunities and experiences, which opens up your world to things you didn’t know about,” said La Broi.