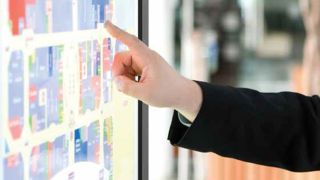 “Interactive digital technology is more than going up to a screen and touching it,” said Rich Ventura, VP of business development and solutions at NEC.

“When we started out in this industry, pushing out to the audience is all you could do. [Now] we’re actually pulling and interacting, engaging people differently than when we started.”

Reactive digital signage, driven by near-field communication (NFC) and other technologies, is enabling the shift from kiosk-driven interaction to what could become the AV industry’s golden age of engagement.

A business with multiple displays in different locations may target the content to consumers individually, “whether through touchscreen entertainment and information, targeted advertising, or mobile-to-screen engagement,” said Malik Khan of ANC.

“With newer technology such as beacons, facial recognition, NFC, Wi-Fi scanning, and other methods of capture, displays now react to consumers, depending on the technology, in varying scales and complexity,” said Malik Khan, senior vice president of integration and product development at ANC.

Retail is the first sector to dive into the possibilities of reactive signage. But while retail sales continue to grow in the U.S., Amazon’s recent purchase of the upscale grocery chain Whole Foods shows the industry faces an uncertain future. The online giant is already experimenting with unmanned aerial vehicles as a method of delivery, and brick-and-mortar chains like Walmart are offering online ordering with curbside pickup. The survival of physical retail stores just might ride on creative uses of digital signage.

“We don’t view digital signage as a competitor to the internet,” said Khan. “We believe it’s best used complementary to the retailer’s internet stores and as a tool to pique shoppers’ interest and make shopping enjoyable again. The deployment of interactive signage should create a new type of shopping experience, which invites consumers out to the store, and transforms it into an experience instead of a chore or errand.”

The quandary retailers are hoping to solve is how to keep shoppers in their stores. As a guidepost of how to keep customers engaged, Ventura points to “one of the greatest interactive solutions” he has seen. In 2010, clothing retailer Forever 21 stopped traffic in Times Square with an interactive takeover of the direct-view LED signage directly over its store. Models on the giant screen waved at passersby, who waved back. Then, the model would take a picture of the crowd that gathered, and hold it up for them to see.

Using facial recognition software and high-definition cameras, the algorithm could pick individuals out of the crowd for engagement—and was particularly keen on those carrying bright yellow Forever 21 bags. The experiment, designed to attract and hold attention, turned into a watershed moment for the digital signage industry.

“People started filming this,” said Ventura. “It was beyond what we think of as digital signage, walking up to a 50-inch LCD screen and touching it. There’s that interaction that goes across the borders, a totally different kind of interactivity.”

At InfoComm, NEC displayed an interactive video wall that used RFID communication to play a specific advertisement once the would-be customer picked up a pair of shoes.

Such innovative uses of technology are still inspiring interactive and reactive developments in digital signage today. At the InfoComm show in June, NEC displayed an interactive video wall that used RFID communication to play a specific advertisement once the would-be customer picked up a pair of shoes. The concept then included upselling opportunities of related items, creating a virtual shopping cart that the customer can purchase with a mobile device using NFC and a digital wallet—a technology nearly half of all millennials have used, according to a survey by Square.

Pre-programmed content can coexist on a digital display system, enabling customers to engage momentarily, then move onto the next area of interest. “Displays can be networked together through one control platform and then segment their content based on the consumers in the individual display location,” noted Khan. “A property may have 15 digital displays in various forms, all showing a promotion for an upcoming property event, but when, say, three of those displays in separate locations are approached by consumers, the content on those displays target them individually, whether through touchscreen entertainment and information, targeted advertising, or mobile-to-screen engagement.” Meanwhile, the digital signage resynchs with the looped content until the next opportunity for engagement triggered by NFC, RFID, or another protocol.

The addition of facial recognition brings the capability to provide content specific to gender and age groups based on broad understandings about those groups and other segments of the population. “In the retail space, the trend with data seems to be around analytics,” said Eric Henry, president of Tightrope Media Systems. “The gathering of real-time population data is driving what content is presented on the screens to drive a specific behavior.”

Noted Khan, “Our partners have put a focus on applications that create an experience while also collecting measurable consumer data.”

These applications, such as kiosks, LED video walls, digital art displays, dynamic lighting effects, and point-of-sale signage, can “turn a traditional shopping trip into a live-event type of experience and also provide valuable analytics on traffic and demographics,” he said. “We’ve seen that interactive signage can provide a similar type of shopping experience as the internet, such as browsing and customizing products in-store but then picking them up a short while later, instead of waiting days or weeks for delivery.”

Another new addition to the retail digital signage portfolio is “magic mirrors” that interact with customers in places like fitting rooms. Using RFID, the display senses the tagged garment and allows the customer to request another size or color according to the store’s inventory. Some will take a 360-degree image that the customer can send to friends for a second opinion on a clothing item. In return, retailers gain valuable insights into how customers make their purchasing decisions.

The evolution of digital display content, Ventura noted, follows the pace of innovation in digital spaces that drive digital displays, such as websites, mobile technology, and HTML code.

“The stronger, better, faster, cleaner, and more interactive websites have become, in turn it’s done the same thing to digital signage,” he said. “One of the great things we’re seeing with interactive systems is that you can evolve based on the interactions, the feedback, [and] the ideas that are happening.”

Artificial intelligence (AI) is now driving machine learning, an automated method of data analysis in which a system’s algorithms learn from the data it collects. “As you deploy more AI and machine learning, the system goes from being what it is today to something completely different in a year,” said Ventura. “The other thing, as more and more retailers are deploying interactive systems, they’re challenging each other, they’re trying to make it more of an experience.”

Jim Beaugez, APR, is a freelance writer and accredited communications professional with a decade of experience in the MI and pro audio industries. You can reach him at jimbeaugez@gmail.com and on Twitter@JimBeaugez.