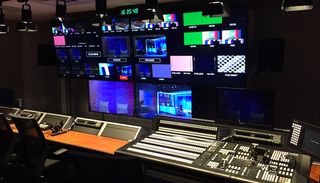 The ribbon cutting ceremony on September 26. (Left to right): Daniel Gurskis, Katsunori Yamanouchi, Susan A. Cole, and Keith Strudler. In a ribbon cutting ceremony on September 26, local politicians, donors, alumni, staff, and students joined school officials to ceremonially open the brand-new, 105,000-square-foot home for media and communications studies—the fruition of the Montclair, NJ university’s goal of providing students with the finest tools with which to learn the workings of the industry.

Drawing upon the school’s close relationship with Sony, systems integrator KMH Integration equipped the building with some $9.6 million of professional-grade technology from the brand and other top manufacturers. With facilities such as four broadcast-ready 4K and HD control rooms and studios, an IP-based radio lab, and 187-seat screening space with 4K projection, the school affords students the opportunity to train on the some of the same equipment they will encounter in the real world.

“We believe that this building is the most technologically advanced broadcast and media production facility of any university in North America, and it is in fact more advanced than the majority of professional production facilities,” said university president Susan A. Cole during the ceremony, in which she, along with Daniel Gurskis, dean of the College of the Arts, Keith Strudler, director of the School of Communication and Media, and Katsunori Yamanouchi, deputy president of professional solutions at Sony North America, cut the symbolic red ribbon.

After the ceremony, student representatives guided attendees on a tour of the facilities, throughout which professors took time to explain how their new teaching spaces enhanced the educational experience for students. One common example was the building’s design around the collaborative, open-layout philosophy that has been gaining traction in workplaces and educational institutions alike.

The school’s 4K control room, which can be assigned to handle productions in any of the building’s studios, features the Sony 4K switcher used by NBC at the Rio Olympics. “The building provides a dynamic, interactive learning environment to engage students across the full range of disciplines of communication and media,” said Gurskis, the college dean. “Through its design, it fosters collaboration not only among students, but also among students and faculty, and students and professional partners.”

Kelly Whiteside, a professor of sports journalism, attested to the influence of this design approach, saying that “breaking down the walls” in places like the multiuse broadcast room has facilitated collaboration across the various media disciplines within the school.

Still, the professional-grade equipment and studios are what set the School of Communication and Media apart from other institutions, and perhaps the most outstanding example is its 4K control room, which features the Sony 4K switcher used by NBC’s broadcast team at the Rio Olympics. According to Patty Piroh, associate director of broadcast and media operations, this control room can be assigned to handle productions in any of the building’s adjacent studios, such as the space containing the full set from the The Nightly Show With Larry Wilmore, which was donated by Comedy Central and serves as the set of Carpe Diem, the school’s daily news program.

Other notable facilities in the school are a motion picture stage; multimedia labs with access to 30 Avid editing suites; an audio production center with a performance stage and sound labs; a radio facility in which students learn on the same systems utilized by Sirius XM; and plenty of bright, open space for students, professors, and guests to meet, socialize, and collaborate.

One of the building’s several studios features the set of The Nightly Show With Larry Wilmore, which was donated by Comedy Central. According to Nick Tzanis, Montclair State’s director of broadcast and media operations, the relationship with Sony—which he played the central role in establishing—was the key to providing such a high-end learning environment given the budgetary constraints typical of educational institutions. “Trying to build the environment we wanted to build within a certain budget was certainly a challenge,” he said. “Universities don’t get that kind of money every day… If we did it without Sony, that [$9.6 million technology cost] would have been a lot higher.”And, Sony’s Yamanouchi said that the relationship is mutually beneficial. “Sony is really proud to play a key role in these efforts,” he said. “This learning space demonstrates our shared commitment to the educational excellence and technological innovation, and I believe it is just beginning. Working closely with Montclair State as its technology and solutions partner, we will continue to learn from each other, and continue to evolve together.”