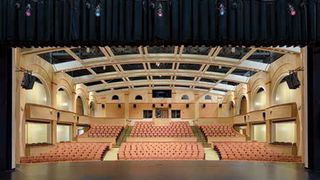 Michael Najar, the school’s choral director and chair of the visual and performing arts department, was adamant from the outset that the 583-seat theater in the proposed new facility provide a level of acoustical quality and flexibility that was absent in the aging facility it would replace.

“Many works of music and theater were created to be heard in a specific acoustical environment in a certain kind of room,” said Najar. “But, there was no way we could build a 16th-century stone church, a jazz hall, and a black box theater. So when I heard Constellation, I knew it would be the best option going forward for venues like ours. For us, it’s been a game changer.”

A Constellation solution was first proposed by Jedd de Lucia and Ian Hunter of the San Francisco-based Shalleck Collaborative, the theatrical and AV consultants for the project. Constellation is an active acoustic system that augments the room’s physical acoustics with additional early reflections and reverberation to help tailor the room to suit the performance. Choral performance benefits from a much different acoustic than musical theater, for example. Because Constellation operates in conjunction with the physical room, the room must be designed with a natural acoustic that is balanced and with a relatively low amount of reverberation. Bill Dohn of Dohn and Associates in Morro Bay, CA worked with the architects to design the room to be optimal for Constellation.

“Initially I had some concerns, as this was the first time I’d designed a room to host Constellation,” he said, “but I am exceptionally pleased with the end result. I was particularly impressed by how the system couples the stage and house seamlessly, giving performers the perception of being in one big room with the audience. This greatly enhances musical performances in a way that is almost never achieved using an orchestra shell behind a proscenium.”

At the core of Palo Alto High School’s Constellation system is a D-Mitri digital audio platform, that hosts the patented VRAS algorithms for generating the early reflections and late reverberations that define a room’s acoustical characteristics with completely natural effect. Arrayed around the room and over the stage are 24 sensitive miniature microphones for sensing the ambient room acoustics, with a total of 52 full-range loudspeakers and 12 compact subwoofers placed overhead and around the perimeter to replicate the desired aural environment. Using a touchscreen controller, the system operator can select presets optimized for any type of musical performance from choral and orchestral to small ensemble and big-band jazz, as well as for musical theater, drama, and lectures.

For direct reinforcement, the venue is equipped with a separate Meyer Sound system anchored at the proscenium by four UPQ-1P loudspeakers, with one each left and right and a pair in the center. For delays, fills, sub-bass, and loudspeaker processing, the system also includes two UPJ-1P and 16 MM-4XP loudspeakers, two 600-HP subwoofers, and a Galileo 408 processor. The system front-end comprises a Yamaha LS9 digital mixing console and a Biamp Tesira DSP and matrixing unit. Installation of both Constellation and direct PA was contracted to PCD Audio-Video System Integration of Santa Rosa, CA.