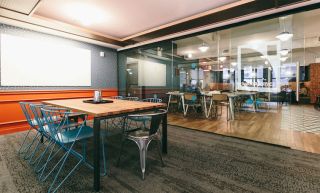 L-Acoustics announces the opening of a new office in Midtown Manhattan and the addition of Sandy Macdonald to the sales team, increasing the company’s already strong commitment to the professional audio industry on the eastern seaboard, and particularly the Broadway market.

The new office space, inaugurated in October, offers the capacity for trainings as well as meetings, and will be home to the growing L-Acoustics East Coast support team. The first training (L-Acoustics System Fundamentals) was held in the new space on October 30. Located within walking distance to Penn Station and several high profile venues with L-Acoustics installations, the new East Coast headquarters will be easy to access, as well as provide close proximity to the important Broadway industry.

Sandy Macdonald is a well-known figure in the professional audio industry, having spent the past 12 years managing sales in the Northeast for Meyer Sound. MacDonald will be coordinating efforts with Jesse Stevens, who spearheads application support for broadway designers and certified providers for L-Acoustics in the region. The duo will ensure that L-Acoustics and its L-ISA immersive solutions are available to broadway sound designers as well as provide local support to theater sound design consulting firms in the tri-state area.

“The East Coast market is particularly diverse and demanding," said Scott Pizzo on welcoming Macdonald to the team. “Over the past few years, we have successfully built a solid presence in high profile venues, festivals and corporate and movie premiere events in the Northeast region and New York City in particular. Those partnerships will now be reinforced by our permanent office presence and expanded with the addition of Sandy who brings a wealth of premium sound experience and theater market knowledge to L-Acoustics.”

L-Acoustics has seen great successes in Broadway recently, with standout productions like Warpaint, Bandstand and, most recently, the triumphant one-man show Springsteen on Broadway. Meanwhile, spring 2018 will see two exciting new high-profile projects landing on broadway with L-Acoustics systems: Mean Girls, a musical written by and based on the Tina Fey movie, and Escape to Margaritaville, a musical exploration of the Jimmy Buffet canon.

“Growing the team and adding a permanent presence on the East Coast is an important milestone for L-Acoustics,” said Laurent Vaissie, CEO of L-Acoustics US and Canada. “It will allow us to better support our key partners in the region and confirm our unwavering support for the Broadway and regional live sound community. The first training in the new space sold out immediately, which is a clear sign that the industry welcomes our expanded presence in the region.”

Founded in 1984 near Paris, France, L-Acoustics is a leading manufacturer of turnkey solutions for the professional sound industry. Part of the L-Group, which counts 400 team members, L-Acoustics is present in over 80 countries either through subsidiaries or via a network of certified distributors or providers. Twenty percent of L-Acoustics’ team-members are dedicated to research and development.

Recognized throughout the industry for pioneering the modern line array, L-Acoustics offers a total system approach for both the touring and fixed installation markets, and a product line responding to the needs of venues from the most intimate club to the grandest arena. L-Acoustics sound systems can be heard in places like the Hollywood Bowl, the NFL Cardinals University of Phoenix Center, or the Philharmonie de Paris. L-Acoustics solutions have been used at five of the world’s ten top-grossing festivals, the London, Sochi and Rio Olympics, and on the Adele 2016 and 2017 World Tour, among others.