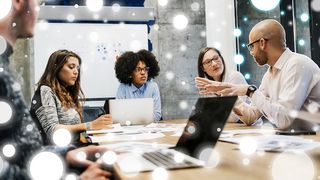 On the heels of the announcement of its distribution agreement with the company last month, Stampede put VRstudios’ platform front and center of its booth at InfoComm. And “platform” is really the best way to describe it: VRstudios enables the user to literally walk around within a virtual environment. Consisting of a wireless headset and a system of sensors mounted upon a cube of stage-rigging-like trusses (which can cover an area from 10 to 40 square feet), the platform is capable of conveying a visceral sense of depth and space that none of its competitors currently offer, according to Kevin Vitale, the company’s executive vice president of global operations and sales.

In addition to the headset, users can carry a controller wand, which is used to “teleport,” or jump your vantage point around larger virtual spaces, as well as to execute actions. In the demo I tried out—a real estate application—by pointing the wand at various elements of the Seattle condo and pressing a button, I was able to cycle through different combinations of wall paint, flooring, rugs, and even artwork.

Besides real estate, Vitale listed a number of other market verticals in which the company’s platform is either currently being used, or strongly considered: construction and architecture, high-end design, car dealership showrooms, simulation and training—especially for military and first responders. “Businesses love to save time and money,” Vitale said. “This lets them sell more, and save money by not making design mistakes.”

Another example of immersion at the show came on the audio side. An interesting but very practical solution to a universal challenge in corporate AV: getting good audio for audio and videoconferencing. Traditionally, this requires a series of mics, either wired or wireless. Such solutions can be complicated, and often fail to deliver consistent results, especially when participants aren’t speaking directly into the microphones.

Collaboration company Nureva demonstrated a new streamlined solution to this problem at InfoComm: its HDL300 audio conferencing system. Resembling an oversized sound-bar, with 12 omnidirectional microphones and two speakers built in, the HDL300 aims to do more than provide consistent vocal clarity; the goal is to facilitate conversations with the feeling of being in the same room, according to Steven Vander Meulen, VP of products at Nureva.

The HDL300 accomplishes this through a technology dubbed “Microphone Mist,” an advanced DSP algorithm that places 8,192 virtual microphones around a room to pick up and process audio. Not only do users hear a speaker clearly, regardless of the direction in which he or she is speaking, but the ambient noise of the room is also conveyed, lending a natural feel to the interaction.

At the Nureva booth, a member of the team walked around a sealed-off glass room designed to approximate the size and feel of a typical conference room. I stood on the other side of the glass wall, wearing a pair of headphones connected to the output of the HDL300 mounted on the room’s wall. As the Nureva employee moved about the room speaking, the audio transmitted to my headphones remained remarkably consistent—whether he was talking directly into the unit or into a corner of the room away from it.