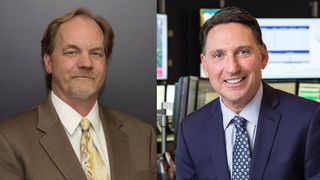 Kevin Collins (left) and Fred D’AlessandroAccording to Diversified president Kevin Collins, one of the primary reasons is geography. “Each one of our acquisitions has a unique contribution to the new organization, and sometimes it might be geographic expansion; sometimes it might be new technical capabilities that address the needs of our customers,” he said. “In the case of CompView, it filled in a gap on the map where we saw some of our enterprise customers having business that we could fulfill specifically in the Pacific Northwest. But even when we looked at areas where CompView overlapped, like in California, in the diligence process we came to understand that they had quite a different client base than we did.”

Another factor is adding expertise, the driving force behind annexing MCW. “MCW had a unique capability in their electronic security, which is an adjunct offering that we’re setting up,” Collins said. “We’re sitting at the table on a lot of projects where security is part of the project, and I think we have a lot of capability in engineering and project management, so we felt like bringing that discipline into our portfolio was going to create more opportunities not only for the customers they had, but for our existing customer base.”

In bringing new employees and offices under the Diversified umbrella, the question of cultural consolidation seems inevitable. According to Collins, it’s a two-way street. “We refer to it as a ‘best-of-breed’ process,” he said. “Any of the companies that we acquire have been successful; there’s something in the DNA of the leadership or the company itself that’s desirable, and we want to be open-minded about learning where they were strong and where they weren’t, seeing where we could improve it or improve ourselves throughout that discovery process.”

“It’s never been about the ‘Diversified way’ of doing things; it’s about creating the best company possible,” added Fred D’Alessandro, Diversified’s CEO. “So if you’re open, if you’re willing to listen to the companies that you acquire and understand what processes and systems that they have used that are better than we have, you create a very inclusive culture, which is what Diversified has always been. I think we’ve done a really good job of giving each office or each company acquired a voice in making us the best company possible.”