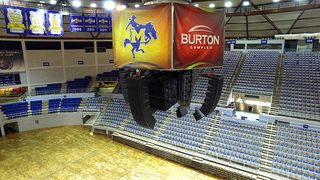 At just under 10,000, the capacity for concert events at Lake Charles, LA’s Burton Coliseum sits in that Goldilocks zone of being neither too big nor too small. “Just right,” as Jason Barnes, director of the facility, recently said. “We took over the management of Burton Coliseum three years ago; at the time, we could see real potential for growth in the events market. This is an ideal midsized venue perfectly suited to having touring productions of all sorts come through.” First opened in 1976, prior to Barnes’ arrival, it had never achieved that ideal; obviously something was wrong. “It’s a large, reverberant, circular concrete building with a domed roof.”

Just as they took over management, Lake Charles was lucky enough to have an American Idol finalist come to the venue. “We needed to stage a homecoming event,” he said. “It was huge for us. We invited all the VIPs from the southwest Louisiana region and trucked in a lot of production. Even so—and by pure coincidence, because we weren’t yet fully familiar with the venue—where we placed the VIPs they had the best view, but they happened to be the worst seats in the house acoustically. They couldn’t hear anything clearly. To their credit, they saw the problem for what it was, and enlightened by the experience, wanted us to find a solution.”

Barnes and his team assembled a brief that—beyond technical parameters—insisted upon “a crisp clear sound throughout the venue,” he said. “It also needed to be tonally sweet, rich, and full spectrum. We didn’t just want clarity; we wanted the solution to be musical.”

Barnes contacted several different sound experts throughout the venue industry, and one made a powerful argument that they should consider d&b audiotechnik, so he talked to other venues that already had such a system. “We quickly realized just how wonderful a d&b system could be. They loved it. Porché Advanced Systems, which ultimately provided and installed the system we now have, presented a demonstration of the d&b Y series—the solution they proposed—and it sounded excellent.”

“They wanted to have something good enough that they could stage their own concert-level presentations, and something that would make their venue the first choice for staging such shows in Lake Charles,” said Jacob “Jake” Porché, explaining his design approach. “The acoustics are not terrible; the domed roof had some baffles fitted a few years ago, but the walls and flat surfaces away from the seated areas are all pretty reflective. Bad, but better than it could have been.

“The system we installed is directive; the Y-Series line array is small and powerful, and performs very accurately to the published specification—a critical factor if we were to tame that reverb. The design is segmented into five zones. Although the building is circular, the arena is slightly oval, so the zones are north, east, south, and west, with the fifth zone on the floor for full, seated events. The floor is covered by the d&b Yi7P point source cabinets. Two hangs of J-Series cardioid subs facing east and west put maximum direct L/F energy into the two largest seating areas. The whole system is powered by a mix of d&b 30D and D80 amplifiers; the D80 provides a little more oomph in the Ys—the 30Ds run the subs.”

Touring concerts aside, there are already more than 70 regularly scheduled events staged at the coliseum each year, including festivals, sporting events, rodeos, and the annual graduation ceremony for McNeese State University. “That’s what sets Jake apart; his company approach is very collaborative,” Barnes said. “When we spoke to him about managing all these different event styles and ways of formatting the room, he provided a range of alternatives with a good rationale behind each suggestion.”

All processing is done within the d&b amplifiers with monitoring and zone control done via d&b R1 remote control software. Porché chose a Symetrix Solus 16 and custom graphical interface accessible via PC or tablet by the administrative staff. “We set up a custom R1 file for them, so they can mute any section of the system depending on seat configuration, and then added a Symetrix DSP interface. Using a simple graphic of the arena, they can just touch and mute the zones that are unseated. With access to R1, they have complete control when they want it, but there is a ‘nanny setting’ limited to adjustment of level only.”

Barnes has no doubt that the new system will prove a valuable asset for the coliseum. “The credo of our agency as a venue management company is to exceed expectations. We do not settle for ‘that will do.’ If it’s affordable, we always go for the highest quality, and this system was entirely affordable. Downstream that approach always pays dividends; you don’t then find yourself stealing other bits of budget in the future for making up the gaps in a cheap deal. Porché delivered an impeccable installation job under some duress when we lost our cushion time to unforeseen events. The Y system has already exceeded our expectations.”