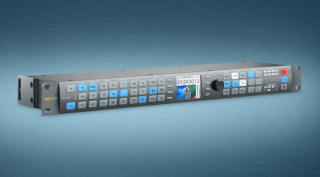 The What Else: The new Teranex AV features low latency that’s as low as 67 milliseconds, which means that customers can convert any HDMI or SDI video format instantaneously to a different format and output it for projection in sync with the live event. For example, customers using Teranex AV at a concert can project a close up of a virtuoso pianist as their fingers fly across the keys on a big screen projector in synchronization with the live performance.

In addition, customers get advanced HDMI 2.0a processing with input, loop-through, and output connections. This lets customers convert HDMI to SDI without any additional hardware. They can loop the HDMI signal out to a big screen projector while simultaneously converting it and and sending it to downstream equipment like decks and monitors.

Teranex AV also features a still store that can capture a video frame in any format and hold it in memory, even when the power is cycled. Customers can preload corporate logos or graphics to display between presenters at conferences, or for outputting sponsor logos at concerts and events between acts. Plus, Teranex AV has built in resynchronization, so customers always get clean switches between the still store and live feeds for professional looking presentations.

The Bottom Line: In addition to HDMI and 12G-SDI connections, Teranex AV also includes quad link 3G-SDI outputs, making it compatible with a wide range of older Ultra HD monitors and projectors that only support quad link SDI 1080 HD inputs. This also makes Teranex AV a great video wall processor because it can split Ultra HD into 4 HD screens, or it can scale regular HD up, split it and output it onto 4 large screens for a tiled video wall.